Photo by Darrell Gest
In this edition of TXHSFB Inside The Numbers, we take a look at which Texas high school football programs have made themselves the most at home in the postseason.

Phil Danaher has accomplished a lot at Corpus Christi Calallen — in his 36 years at the helm of the Wildcats, he's won 402 games (which would rank third all-time in a career, if he hadn't also won 68 games in ten seasons at Dilley and Hamshire-Fannett) and won a state-record 87 playoff games (he's at 91 career playoff victories). The only way you accomplish those types of feats is with remarkable consistency, and that's been the name of the game for the Calallen Wildcats. 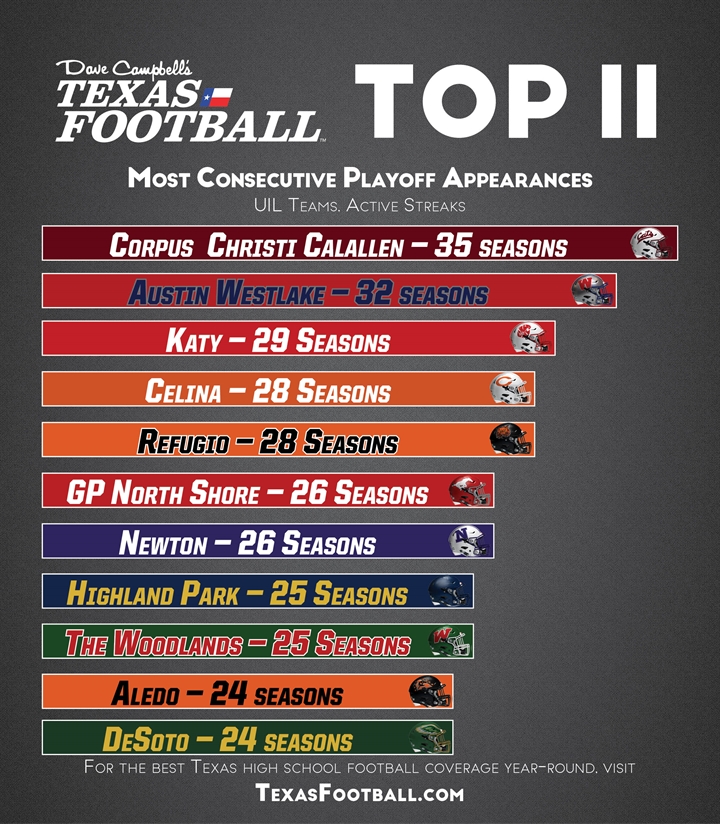 It's no wonder, then, that Calallen tops the active list of most consecutive playoff appearances among UIL Texas high school football teams, reaching the postseason in 35 consecutive seasons. You have to go back to 1984 — Danaher's first season with the Wildcats — to find the last time Calallen missed the playoffs. And it's not like the Wildcats are one-and-done when they get there: Calallen averaged 2.4 playoff wins per season during their streak, meaning that losing in the regional semifinals technically constitutes a below-average season.

Not far behind them, Austin Westlake has made themselves at home in the playoffs as well, qualifying for the postseason in 32 consecutive seasons dating back to 1987. Perhaps more impressive is the fact that the Chaps have maintained that success through four different coaches — Ron Schroeder, Derek Long, Darren Allman and now Todd Dodge — and have brought home a pair of titles in that span in 1996 and 2019.

Another perennial power with an iconic head coach, Katy has made the playoffs in 29 straight seasons, with 1990 being the last year without the Tigers in the tournament. Gary Joseph has led the way for the Tigers in the majority of those seasons (16 and counting) and brought Katy four championships, but don't forget Mike Johnston, who started the streak in 1991 and brought home three titles himself.

A pair teams that are no strangers to the big stage are right behind them, as Celina and Refugio have qualified for the playoffs in 28 consecutive seasons (and brought home a combined 10 titles in that span). Galena Park North Shore and Newton are next, with 26 straight playoff seasons, followed closely by Highland Park and The Woodlands at 25 straight postseason apperances. Aledo and DeSoto round out the list with 24 consecutive tournament berths.