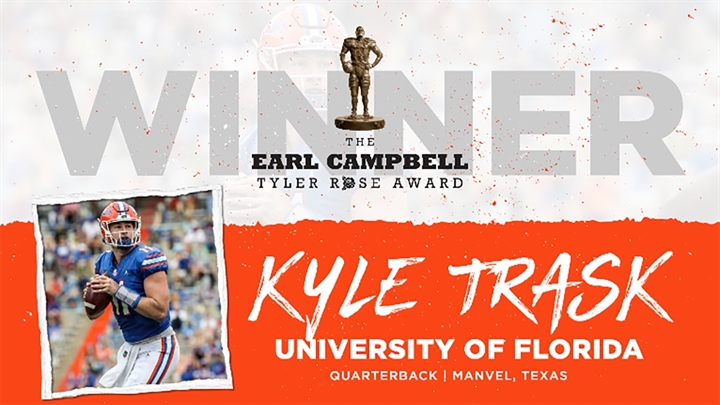 “I’m honored to present the award to Kyle Trask,” Earl Campbell said. “All of these players had incredible seasons. They all deserved their place as a finalist.”

Kyle Trask threw for 4,283 yards and 43 touchdowns this season as he led one of the most explosive offenses in the country in the Florida Gators.

The Manvel, Texas native led the FBS this season in total touchdowns (46) and touchdown passes, while ranking second in passing yards.

Trask’s three touchdown passes against Alabama in the Southeastern Conference Championship Game made him the ninth player in FBS history to throw at least 43 touchdown passes through the first 11 games of a season. Of those nine, Trask is one of three to accomplish the feat with fewer than 50 attempts per game.

Trask set a single-season school record with five 400-yard passing games; he was one of two FBS players this year and one of two SEC players (Mac Jones) since at least 1996 with five such games in a season.

Trask was responsible for 46 touchdowns (43 passing, 3 rushing), which is second on UF’s single season record list to Tim Tebow’s 55 (32 pass, 23 rush) from his 2007 Heisman-winning campaign. His 46 touchdowns are also tied with Texas A&M’s Johnny Manziel (2013) for sixth on the SEC single-season record list.

The other four finalists for the award were:

The Earl Campbell Tyler Rose Award, announced in 2012 by the Tyler Chamber and SPORTyler, recognizes the top offensive player in Division I football who also exhibits the enduring characteristics that define Earl Campbell: integrity, performance, teamwork, sportsmanship, drive, community, and tenacity; specifically tenacity to persist and determination to overcome adversity and injury in pursuit of reaching goals.

In addition, the nominee must meet one or more of the following criteria: born in Texas and/or graduated from a Texas High School and/or played at a Texas-based junior college or four-year Division I Texas college.