Who are the most productive runners coming back to Texas high school football in 2022? Take a look at the best in Texas, including El Campo's Rueben Owens, College Station's Marquise Collins and Katy's Seth Davis.

Who says running the ball is passé?

While the aerial attack has undoubtedly stepped to the forefront of Texas high school football over the past two decades, the ground game continues to flex its muscles as well. Consider this: in the 2000 Texas high school football season, there were 21 UIL 11-man players who ran for 2,000 or more yards; 21 years later, there were 31 players who reached the 2K plateau. So while the passing numbers may be gaudy, the rising offensive tide has raised all boats, including the running game.

But which teams will welcome back the most prolific rushers in 2022? Here's a look at the top 10 returning rushers in UIL 11-man Texas high school football heading into the 2022 season. 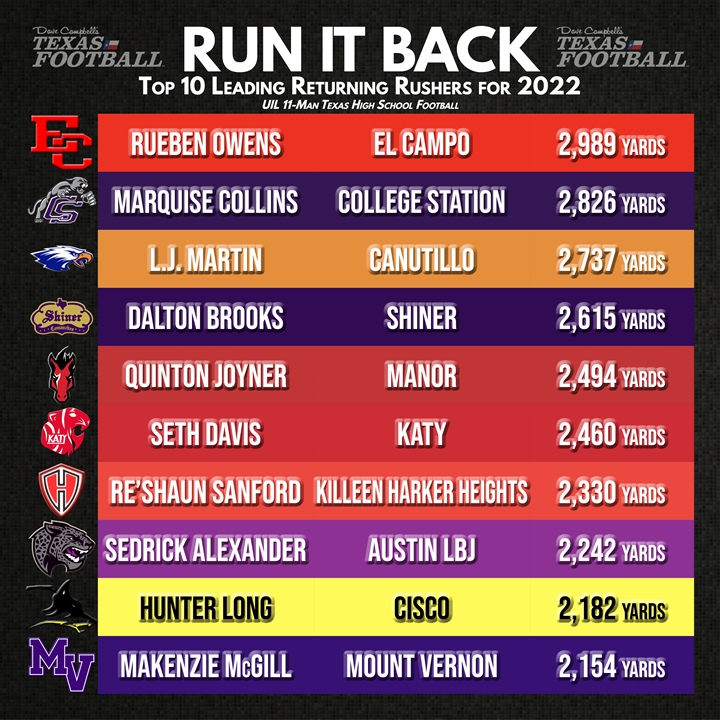 El Campo running back Rueben Owens is one of the most highly sought-after prospects in the Class of 2023, and the numbers can tell you why: not only is he the state's leading returning rusher, but he was the state's overall leading runner in 2021. It's the first time that a player returns to Texas high school football after leading the state in rushing since 2018 when Wichita Falls Hirschi's Daimarqua Foster led Texas as a junior in 2017.

Not far behind him is College Station's Marquise Collins, who helped guide the Cougars within inches of the 5A Division I title; he'll return for his senior year, though it'll be with a new coach after the departure of Steve Huff for Decatur. Way out west, Canutillo's L.J. Martin may be the state's best-kept secret as one of just five players to rush for more than 2,700 yards in 2021. Shiner's Dalton Brooks will return for his senior season after guiding the Comanches to back-to-back state championships, while Manor's Quinton Joyner has an opportunity to bring the Mustangs to even greater heights.

Seth Davis returns at Katy after yet another spectacular underclassman year for a Tigers running back, and Killeen Harker Heights' Re'Shaun Sanford will try to out-do his breakout junior season in 2021. Sedrick Alexander is back at Austin LBJ after leading the Jaguars to the 4A Division I state championship (though they'll contend in 5A Division II this time), and stars from out west (Cisco's Hunter Long, the lone quarterback on this list) and out east (Mount Vernon's Makenzie McGill) round out the top 10.