Ozarka Fueled by Nature Team of the Week

Dave Campbell’s Texas Football is proud to honor one team from each classification with the Ozarka Fueled by Nature Team of the Week award. The teams selected throughout the course of this program have exemplified the best of Texas high school football. 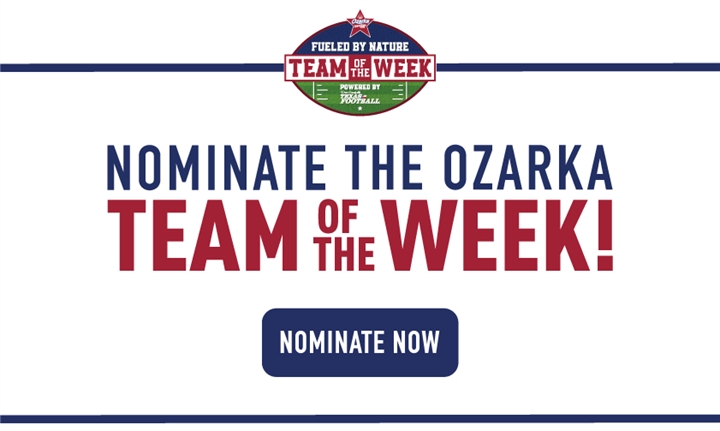 The Bulldogs’ long wait is finally over as Socorro toppled El Paso, 46-23 on Thursday night, ending a 53-game losing streak and getting in the win column for the first time since September 11, 2015.

The Lions rang off 21 points in the fourth quarter to rally past Sealy 41-34, improving to 3-0 for the first time in the program’s young history.

Daylon Houston ran for 223 yards and a touchdown and the defense did the rest as the Eagles snapped a 32-game losing streak dating back to 2017 with a 17-7 win over Weimar.

The Mustangs are 2-0 for the first time since 2010 with a hard-fought defensive victory over Acadiana Christian (LA) on Thursday, 16-14.

The Wildcats’ run of dominance continued on Friday night, notching their third consecutive mercy rule victory with a 54-8 win over Garden City.

The Broncos rallied from an early deficit, getting a fumble recovery for a touchdown from Andrew Boyd in the fourth quarter to bring home a 17-14 win over Brazos Christian and remain unbeaten.

The Eagles did what no team has ever done — beat Allen at Eagle Stadium — with a 40-21 victory, snapping the state’s all-time longest regular season winning streak at 84 games.

Fueled by 172 yards and two touchdowns on the ground from Ya’aqob Lozano, the Toros mounted a second-half comeback and scored the go-ahead two-point conversion with under three minutes left to stun Laredo Nixon, 22-21.

The Gobblers signaled to the rest of 4A Division II that they are back, stifling Wimberley’s high-powered attack to come away with a resounding 21-3 road victory.

Walker Cunningham hit Anthony Mason for a go-ahead 82-yard touchdown pass with under two minutes to play as the Cougars improved to 2-0 for the first time since 2018 with a 24-22 win over Natalia.

In a game against a state-ranked 3A team thrown together midweek, the Bears were not phased, using their remarkable team speed to take down Waskom, 49-28.

The Mustangs surged out to a 20-6 first quarter lead and never looked back, surging past Crowell 54-46.

Joshua Rico threw six touchdown passes in the first half as part of a 720-yard assault as the Warriors improved to 2-0 with a 68-20 win over Dallas First Baptist.

The Rockets made last year’s season-opening lopsided loss to DeSoto seem like a distant memory, getting four total touchdowns from quarterback Michael Burroughs in a 35-28 win.

The Mustangs held Richmond Foster to just 176 yards and forced three turnovers as they stunned the Falcons 21-14, snapping an 11-game losing streak and avenging last season’s 79-7 loss to the Falcons.

Coach Brandon Houston’s debut was a sparkling one for the Ducks, snapping a 21-game losing streak with an emphatic 32-13 victory over Robinson.

It’d been nearly three full calendar years since the Bulldogs found the win column, but that all changed on Friday night as the Bulldogs beat Cumby 23-6 to snap a 28-game losing streak and give Quitman its second win in the last 73 games.

In a matchup of Panhandle powers, quarterback Cody Rinne ran in for the game-winning score in the waning seconds as the Elks stunned Spearman, 29-22.

After forfeiting their final four games of the season in 2020 due to low numbers, the Eagles won their first game since November 8, 2019 with a victory over Cotton Center.

In one of the most stunning upsets of the opening week of the season, the Flames jumped out to a 34-14 halftime lead and never looked back, taking down perennial six-man power Richland Springs, 62-34.