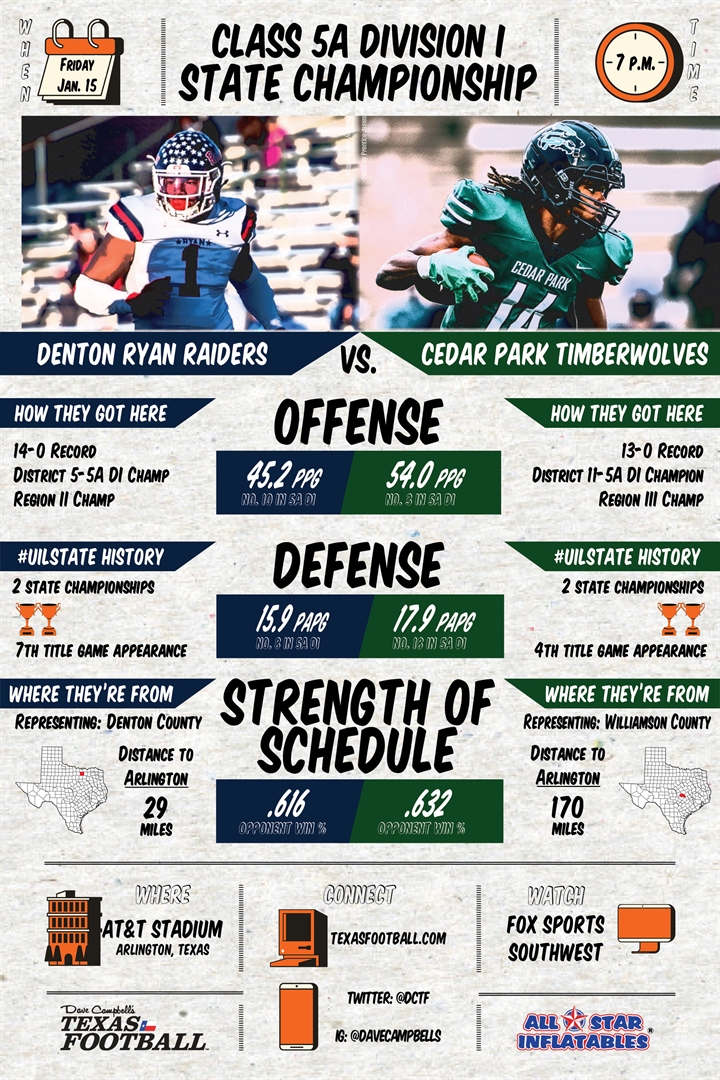 The Raiders have been dominant all year and after dispatching of Longview and Highland Park in back to back weeks, many thought they would stroll past Mansfield Summit in the semifinals. Summit had other ideas and pushed the Raiders late, but Ryan made key plays in crunch time to escape with a 49-35 win.

Several players came up big for Ryan in the win, none more than Oklahoma signee Billy Bowman, who had 13 catches for 134 yards and a touchdown, along with an interception. DB Ty Marsh, a likely FBS signee in February, had an interception and a fumble return for a touchdown. QB Seth Henigan, a Memphis signee, threw for 208 yards and two touchdowns and also caught a touchdown pass on a trick play.

Cedar Park hit the jets in the third quarter to blow away Corpus Christi Veterans Memoria,l 61-28. The Timberwolves scored five straight touchdowns in the second half to blow the game wide open and a big reason for the explosion was QB Ryder Hernandez and the CPHS offense. Hernandez threw for 394 yards and seven touchdowns, spreading the ball around to seven different receivers on the night.

The Cedar Park defense, which had some issues slowdown down Veterans Memorial in the first half, totally dominated the third quarter by forcing two turnovers and stopping Vets on a 4th and 3 at midfield.

Hernandez is a great QB and he’s got a bevy of weapons, but this game is going to key on Cedar Park’s offensive line; if Denton Ryan is able to pin their ears back and get after Hernandez, their DB’s are good enough to stick with Cedar Park’s receivers in space. That could make for a long night for Cedar Park and I don’t anticipate Denton Ryan not showing up ready to play after last week’s scare and their heartbreak of the state title loss a year ago.

ATH Jatavion Sanders – Need an elite pass rush? An elite pass catcher? Need someone to wash your car? Jatavion Sanders is a freak of nature that can do everything at a high-level. The future Longhorn has over 1,000 yards receiving and will line up with his nose downhill when the Raiders need a big stop on defense.

WR Billy Bowman Jr. – The lightning to Sanders’ thunder on the outside, Bowman is Seth Henigan’s reliable route-runner with over 1,000 yards receiving, but also a lockdown corner on the other side. It’s been nearly impossible for teams to shut down both him and Sanders in the passing game.

LB DJ Arkansas – Cedar Park’s offense has been stellar all season, but it hasn’t faced a team with Denton Ryan’s athletic prowess and playmakers like D.J. Arkansas. The senior along with his breakout sophomore teammate, Anthony Hill Jr., will look to frustrate the high-powered Timberwolves.

QB Ryder Hernandez – This isn’t the Cedar Park teams of old that used to rely on stingy defense and a methodical offense. The Timberwolves’ record-setting senior has had perhaps the most underrated prolific passing seasons in the state with over 4,200 yards passing, 58 touchdowns to just two interceptions and a completion percentage of over 70. Carl Abseck’s team has put up over 50 points 10 times this year.

OL Luke Williams – Cedar Park is facing the most athletic group of players it’s seen all year by a good margin. The Timberwolves’ anchor on the offensive line will be pivotal in protecting Ryder Hernandez and letting him deal the ball down the field.

WR Gunnar Abseck – With Denton Ryan likely giving Josh Cameron plenty of attention, Cedar Park’s playmaking slot will likely be where the bulk of the yards come from. All year Carl Abseck’s relied on his son in the screen game to generate big plays from seemingly nothing. Gunnar has over 1,012 yards and 15 touchdowns on 77 catches.

Ja’Tavion Sanders. Billy Bowman. What more do we even need to say? That pairing is one of the most unfair in Texas high school football at any level. Cedar Park boasts a solid defense with talented players in the defensive backfield, but are they up for the job of covering these two? We’ll see!

Cedar Park has risen to the championship game thanks to all-state offensive lineman Luke Williams leading a strong offensive line. However, Ryan junior DT Bear Alexander has transformed himself into a blue-chip talent in a breakout 2020 season and can pull this game in Ryan’s favor. Cedar Park needs its interior line to step up and survive the onslaught of FBS talent all over Ryan’s line. 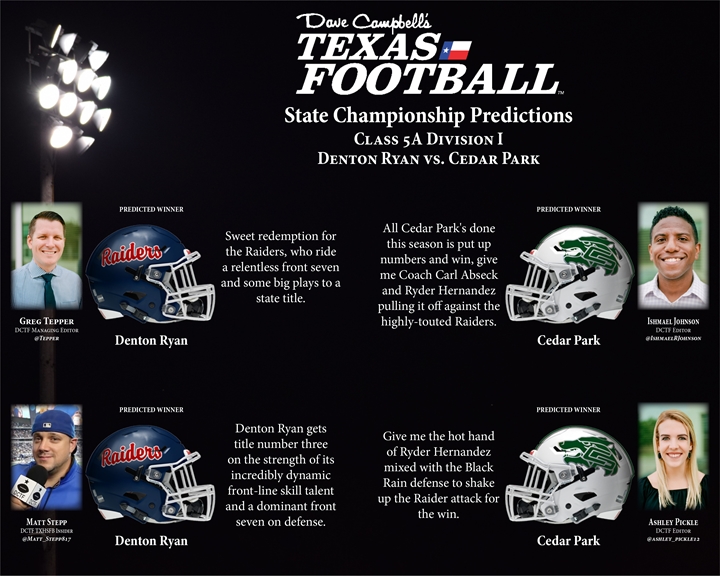