Jacob Henry is not standing in his father’s shadow.

The son of Olympian and WWE Hall of Famer Mark Henry, Jacob has already established himself as one of the premier athletes in the state. A sophomore at Lake Travis, Henry has already won a district title in wrestling and placed at state-level competition.

“I wanted him to have his own identity,” Mark Henry said. “I did not push him into weightlifting or powerlifting because I want him to carve out his own (identity).” 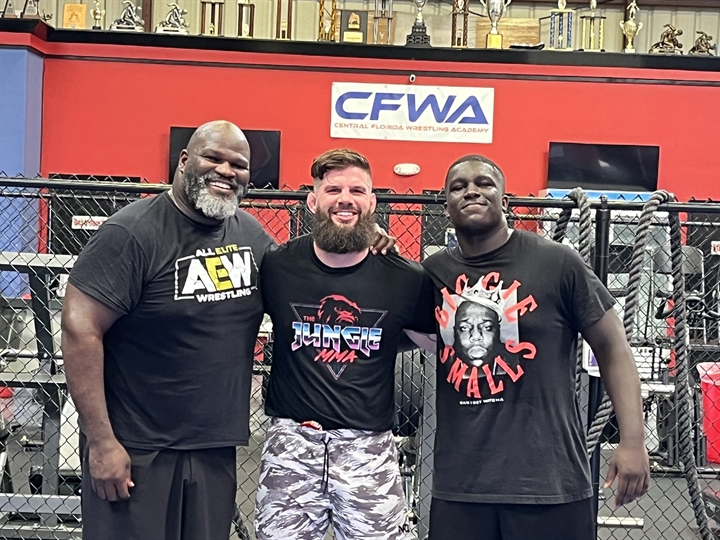 But a big part of Jacob’s success ultimately came from the attitudes that his high achieving family taught him at a young age.

“Jacob understands that you have a choice and a chance,” his father said. “You can choose not to do something but you may not get another chance, and sometimes you only get one.”

Jacob is making the most of his opportunities. His goals are only getting bigger as he continues to create a name for himself.

What’s next on his list? The wrestling state title.

“My goal is to win state because I was the only sophomore at the state championship to place,” he said. “Out of the top six to place, only two of them are coming back besides me…I feel like the next time they wrestle me, I’ll be ready for them.”

But wrestling is not the only sport that Henry has major goals for. He was recently named Lake Travis football’s Sophomore of the Year for his impact on the field. Henry recorded 29 tackles, 2.5 sacks, one forced fumble and one fumble recovery last season.

“All of the playoff games that I had the chance to play in and start (in) was when I started to really perform,” he said. “So now my goal for next year is to wreck havoc from the very beginning.”

Henry has already begun his preparation for the fall, gaining at least 15 pounds in muscle and attending the Polynesian Bowl Combine in March. All of his work is geared toward attracting the attention of college coaches. The 6-foot-1 defensive tackle cited Michigan, UCLA, USC, Ohio State, Texas and Texas Tech as some of his dream schools to play at.

“I feel like this is my season to show all the colleges what I’m capable of and that I can play at a Power Five level,” he said.

But when he isn’t practicing for the many sports that he’s involved in, Henry can be found cultivating his non-athletic passions. He’s a proud member of the school choir. Henry has even taken dance classes and was part of an R&B band for two years.

“I love choir,” he said. “It’s a good group, a fun group…The harmonies are so beautiful. I love it. It’s always been something that I’ve always loved.”

Although Henry fosters his artistic passions, he hasn’t lost sight of his many athletic goals.

As he continues down his list of goals, Henry has already begun to make a name for himself on his own terms.