The 60th annual edition of ‘the bible of Texas Football’ revealed its storied cover on Monday featuring Texas quarterback Sam Ehlinger for its latest iconic image. The headline captures the duality of opinions on the Longhorns signal-caller: "BRING IT ON: Sam Ehlinger hears the hype and the hate. He's ready." Ehlinger is the first Longhorns player to grace the cover of the magazine since 2009.

"Choosing the cover of the magazine is the biggest decision we make every year at Dave Campbell's Texas Football," said Greg Tepper, the magazine's managing editor. "We have to get it right, and it's a really difficult choice, especially when it's the 60th annual edition. The buzz surrounding Ehlinger and the Longhorns after their breakout 2018 season makes them, in my mind, the most compelling story in the state entering the 2019 season. That's cover-worthy."

For the fourth consecutive year, the magazine will feature a second "gatefold" cover, and this one's sure to get people talking: Galena Park North Shore — embodied by superstar running back Zach Evans — and Duncanville — personified by dynamic quarterback Ja'Quinden Jackson — square off in the latest battle between Houston and Dallas for Texas high school football supremacy. The headline says it all: "It's bigger than titles. It's for the city." 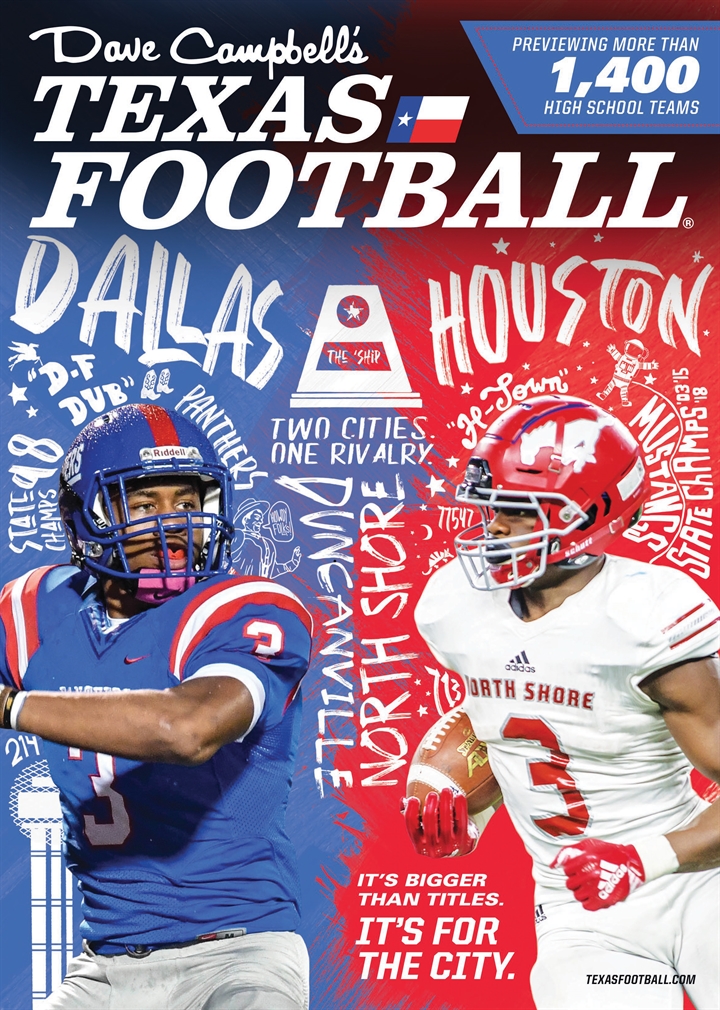 "Who can forget North Shore and Duncanville's amazing Hail Mary finish in the state championship game last season?" Tepper said. "These are the two Texas high school football teams that people are talking about, and they embody the cities they represent so well. Dallas vs. Houston is a great rivalry, and we wanted to capture that."

The 400-page all-color annual magazine covers football in Texas — from high school to recruiting to college to the pros — as no other publication can. Inside the 400-page magazine, readers will find:

Want your copy of Texas Football before it hits newsstands? Become a Dave Campbell's Texas Football Insider! Get two magazines — the 2019 summer edition and the 2019 recruiting edition (coming in December) — as well as a year's worth of exclusive online content at TexasFootball.com, including digital archives of all 60 editions of Texas Football, expanded previews of every Texas high school football team and lots more. Available for a limited time for $19.95 (+S&H) for the first year, and $24.95 (+S&H) annually after that. SUBSCRIBE BY JUNE 4 TO GUARANTEE YOUR MAGAZINE ARRIVES BEFORE IT HITS NEWSSTANDS.

To request interviews with Managing Editor Greg Tepper, please contact greg.tepper@texasfootball.com. To download high-resolution images of the cover, visit bit.ly/DCTFCover2019. Subscribers should begin to receive magazines the third week in June; the magazine should hit newsstands across Texas beginning the first week in July.