The Westbrook Wildcats will take on the May Tigers in the 1A Division I UIL Football State Championship at AT&T Stadium. Game time, date, preview, prediction, players to watch and key matchups.

Westbrook (10-4) vs. May (14-0), 11 a.m. Wednesday at AT&T Stadium in Arlington
The state championship extravaganza will kick off Wednesday morning in Arlington with a scintillating six-man title game pitting favored May against relative upstart Westbrook. The Wildcats, led by coach Homer Matlock, make their first trip to AT&T Stadium in program history, and they didn’t get there the easy way — Westbrook started off 2-4, though their losses came to both 1A Division II state finalists (Strawn and Motley County), a Division I regional finalist (Water Valley) and another perennial power (Garden City). Since that trio of losses, the Wildcats have caught fire — including a pair of wins over defending state champion Sterling City — thanks in large part to Cedric Ware, who’s run for more than 2,300 yards and 41 touchdowns and also leads the team in tackles. They’ll enter the title game as an underdog against May, which came up short in the title game a year ago and look poised to finish the job this time around. Coach Craig Steele’s Tigers feature a bevy of weapons in their ground game, most notably Kaden Halk, Blake Harrell and Avery Williford, but the real headliner for May is the defense, which ranks 5th in 1A Division I in scoring. If Westbrook is going to spring the upset, they’ll need a monster game from their superstar Ware to find a way past the ferocious Tigers defense. The Wildcats are probably better suited getting into a shootout, while May will try to lean on their defense to bring them their first title since 1977. - Greg Tepper

ATH Cedric Ware - The do-it-all star for the Wildcats, Ware has run for more than 2,300 yards and 41 touchdowns on the ground and is also the team’s leading tackler. If Westbrook is going to bring home its first title, he’ll have to be a big part of it.

ATH Kaden Halk - The tip of the spear for a versatile and deep group of May backs, Halk is the big-play threat that can take it the distance with any touch. Also a star on defense, expect a big game from him as he looks to avenge last season’s state championship loss. 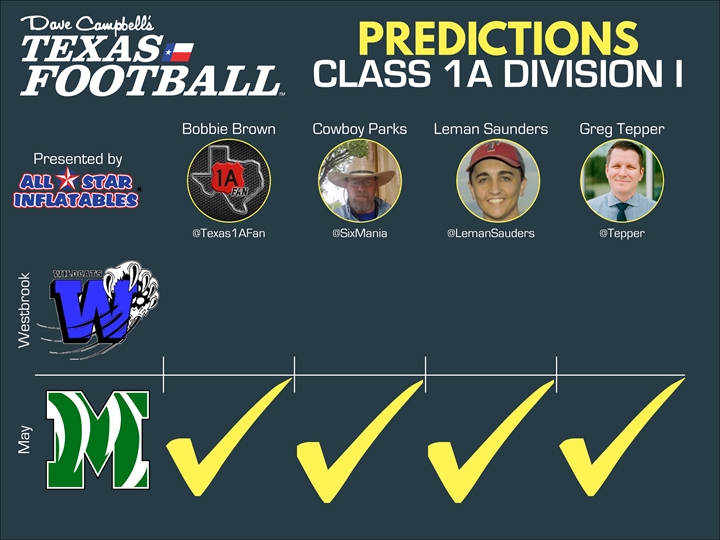