Texarkana Pleasant Grove’s Connor Stanfill serves his community with the same intensity in which he serves his running backs.

Connor Stanfill has continuously sacrificed his body for someone else to get the spotlight.

Then again, doesn’t that perfectly define the life of an offensive lineman? It’s the only job that you never really want the spotlight since that usually brings with it that horrible yellow flag.

Playing offensive line is the perfect position for a young, under-the-radar guy like Stanfill. It’s the only position he’s ever played and now plays it at a very high level for Pleasant Grove High School, a powerhouse team from Texarkana.

“Offensive line is really great for Connor since he’s never wanted the headlines. He’s never liked being the guy who verbally takes charge. But he’s definitely a leader in his own way,” explains his dad and Pleasant Grove’s public address announcer, Quinn. “The coaches have asked him to take a vocal leadership role before and that’s just not his style. He’s a guy who steps forward and others follow, but really he’s a pretty shy kid.”

Shy or not, Stanfill is leaving a rather loud and positive impact on his team, his school and the community. It’s the reason he’s Dave Campbell’s Texas Football’s Unsung Hero presented by Texas Farm Bureau Insurance. Each season Dave Campbell’s turns its sights on finding great kids who might not be the 5-star quarterback or the headline-grabbing receiver. The focus here is winning on the field and leading off of it, and Connor fits that description like a snug pair of lineman gloves.

“We ask our players to focus on two things: Growth and Impact,” Pleasnt Grove head coach Josh Gibson said. “How much will they grow as young men and how much of an impact will they have using their platform. Connor Stanfill has made a HUGE impact as a varsity starter but he’s made an even bigger impact serving his school, his church and his community. His selfless acts of service are rare in this day in age, especially for a high school kid. But Connor just truly gets it.

“Connor is the kind of young man you want your daughter to marry. He is a great teammate, great student and a coach’s dream.”

When Stanfill isn’t tossing weights - or defensive linemen - around he’s probably volunteering at his church operating the video and audio equipment. He also helps with the children’s ministry as well as the runs point for the student ministry. If his dad, the music pastor for the church, receives a call from an elderly citizen looking for assistance, Connor is always the first to show up cutting grass, running errands, sweeping pine straw. Whatever’s needed at the time.

There’s a good chance Stanfill won’t play his last snaps of football when his Pleasant Grove career ends. He’s received plenty of attention to play at the next level where he plans to pursue the ambitious career of biomedical engineering. 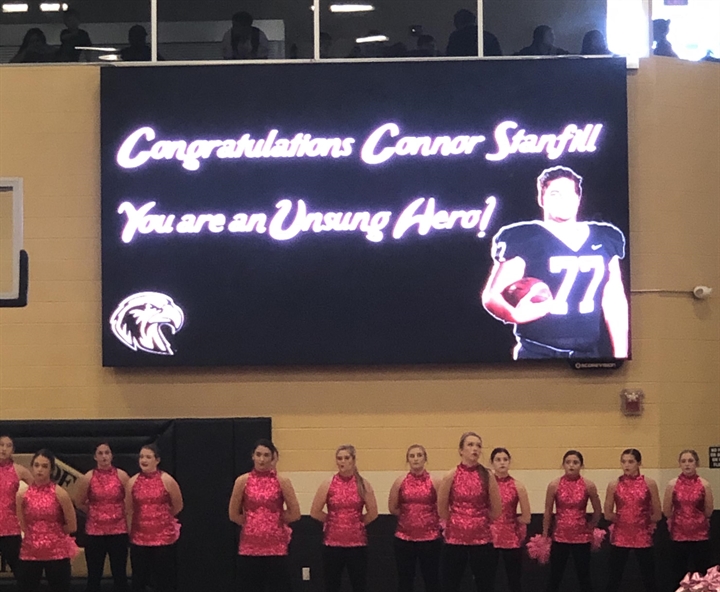