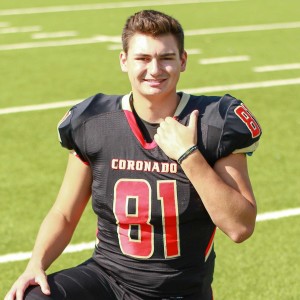 It’s probably a good thing that Zach Stepp’s time at Coronado High is coming to an end – as there is no more room on the sleeves of his letter jacket to hold the patches of his numerous accomplishments.

None of this athletic success has been a surprise to current Coronado football head coach Seth Parr, who said Zach’s leadership helped the coach’s transition into the Coronado program after coming over from Amarillo Caprock. Coach Parr also mentioned that Zach’s team-first mentality and preparation are a reflection on his upbringing.

That dedication to preparation extended into the classroom as well, where Zach’s studiousness has earned him membership in the National Honor Society and 1st Team Academic All-State honors in both football and basketball this season.

After graduation, Zach plans to stay in Lubbock and attend Texas Tech, where he will major in Kinesiology with the intent to attend medical school. Coach Parr said that he expects that Zach will continue earning high academic marks into college, and that he has a suspicion he’ll be a standout on the Tech intramural fields as well. 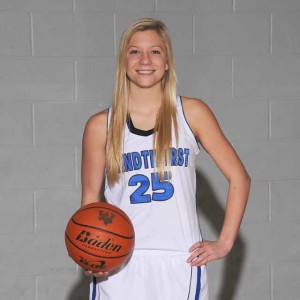 Windthorst senior Breann Schreiber has no shortage of teams to play on. During her time in Windthorst, she has participated in volleyball, basketball, track and softball. As an outside hitter in volleyball, she helped lead the team to two state tournaments, leading the team in kills and blocks this season. As a post player for the basketball team, she helped the team reach the regional tournament the last two years, three straight district titles, and was the team’s third-leading scorer and leading rebounder this season. On the track, she's a hurdler — qualifying for the regionals in the 100-meter hurdles the past three years — and a triple-jumper. And in softball, she played first base for a regional finalist.

But Schreiber is more than just a multi-sport star; she's also a star in the classroom and community. She was named to the TABC and TGCA academic all-state teams. She is an active member of her local church and helps others out as much as she can. Breann’s coach in three sports, Heather Starks, believes that Breann's involvement in the community and leadership make her a standout at Windthorst.