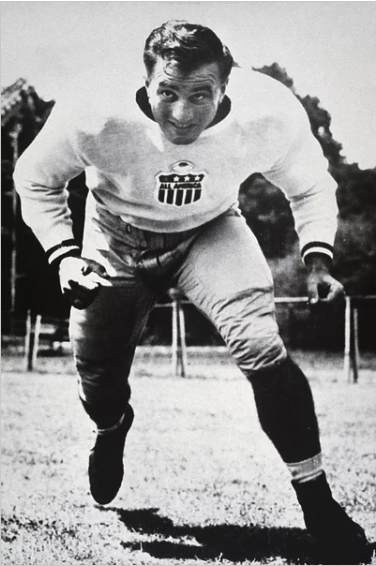 Humble lettered in four sports and earned all-city and all-district honors as a fullback in 1939 at San Antonio’s Brackenridge High School. Rice coaches Jess Neely and Joe Davis moved him to guard, where he was named All-Southwest Conference and the league’s most valuable player in 1942. After Marine combat duty he returned to Rice, again attaining those honors and adding consensus All-America. He captained the Southwest Conference co-champion Owls to an 8-0 upset of Tennessee in the Orange Bowl. Equally illustrious was his professional football career with the Cleveland Browns and the Dallas Texans, the future Baltimore Colts­–a career again interrupted by the Marines. He was also a Texas Sports Hall of Fame enshrinee in 1969. A Houston businessman, he has been honored there for his many and varied civic activities.