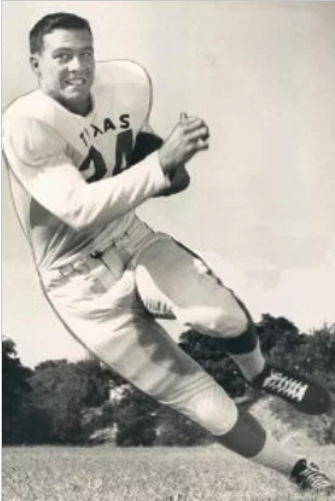 Fondren quarterbacked Lamar High School in 1953 to the first undisputed football championship for a Houston school in 33 years. Fondren’s ball-handling, faking, and kicking beat Waco High School 12-7 in the semi-finals. In the title game against Odessa, Fondren scored two touchdowns and set up a third while running for 145 yards, passing for 34, and averaging 35 on his punts, Lamar won 33-7. Fondren continued his versatility at the University of Texas, leading the Longhorns in punting two years, in scoring twice, in passing once, and in rushing twice. He still holds seven school records for punt runbacks and kick returns as well as a passing record. Texas players voted him most valuable player, and he was All-Southwest Conference. Fondren co-captained the 1957 team that went to the Orange Bowl.