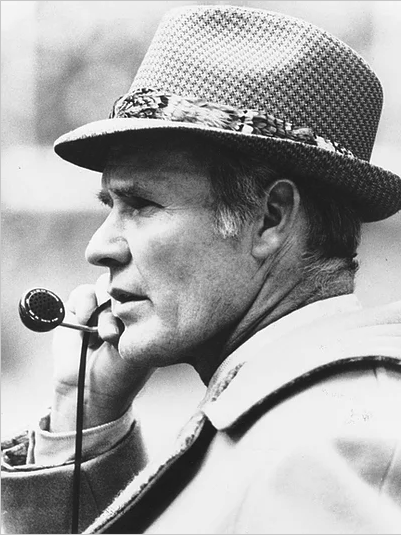 Landry needed only two words to show how good he was at Mission High School – “All Regional.” Outstanding in all phases of the game as a ball carrier, blocker, passer, receiver, and kicker, his defensive skills and thinking ability showed up early. At UT, he was good enough to get a try at pro football. After one year of college, he joined the Air Force and flew 30 B-17 missions. He was co-captain and standout on the Longhorns 1947 and 1948 teams, which beat Alabama in the Sugar Bowl and Georgia in the Orange Bowl. He was also a punter and defensive halfback for the New York Giants. Landry started his career as a pro coach in 1956. The first Cowboy teams went 0-11, early teams were 13-38 before Landry’s incredible 21-year string of nine straight appearances in playoffs and two Super Bowl championships. He tallied a 119-46 win-loss record from 1975-1983. Awards include the NFL Alumni Association for “Distinguished Service,” the Football News’ “Man of the Year,” and the Touchdown Club’s prestigious award for “Contributions to America’s Youth.” In 1984, Mission named its high school football field for its famous son.