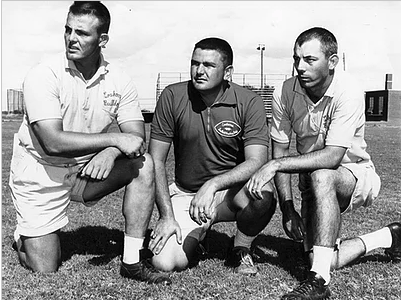 Spike Dykes began his nationally famous coaching career in the ranks as a Texas high school football coach. In his first head job at Coahoma High School in 1964 he quickly led the Bulldogs to records of 10-1, 12-1 and a trip to the quarterfinals. He later coached at Belton, Big Spring and Alice. From 1972 to 1979 he served as an assistant at Texas, New Mexico and Mississippi State. He returned to Texas to coach at Midland Lee where he compiled a 34-12 record from 1980-1983. His 1983 team narrowly missed a state championship, losing to Converse Judson 25-21 in the 5A title game. Dykes joined Texas Tech in 1984 as an assistant and took over the head job in 1986. During his tenure (1986-1999) he led the Red Raiders to six bowl games, was named Southwest Conference Coach of the Year three times, won a SWC conference title and coached nine first-team all-Americans. Dykes retired with more wins (82) than any coach in Tech history. His career high school coaching record is 90-40-1.