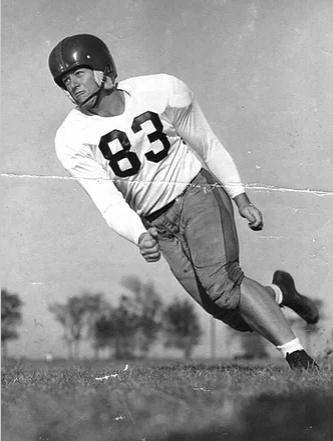 Halliday was an All-City end who helped lead the Woodrow Wilson Wildcats to the district championship in 1939. The Wildcats defeated Masonic Home and Sulphur Springs in the playoffs before losing to eventual state champion Lubbock in the semi-finals. Halliday scored the first touchdown pass ever at Dal-Hi Stadium (later P.C. Cobb) in Dallas. At Schreiner University he made all-conference in football and basketball before transferring to SMU in 1942. During World War II he made the All-Marine Football Team while in the V-12 program at Arkansas A&M in 1943 and 1944. He returned to SMU for the 1946 and 1947 seasons and was team captain on the Mustangs’ 1947 SWC championship team. Halliday made the All SWC team and was also selected to play in the 1947 Chicago Tribune College All-Star Game. He was drafted by the Washington Redskins in 1945 but pursued a career in sporting goods working for The H.B. “Doc” Hughes Company until his death in 1964.