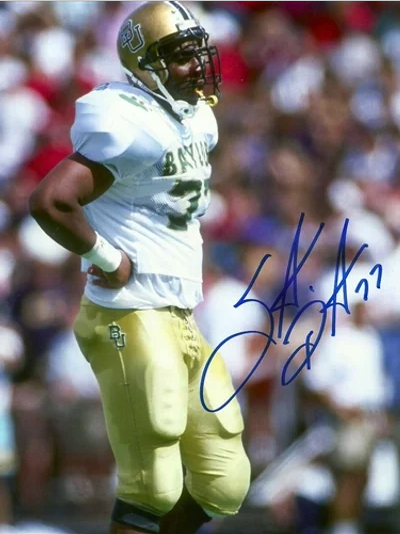 Santana Dotson, an all-district and all-state defensive end, led Yates to a 36-4 record during his high school career. As a senior Dotson was selected to the Houston Chronicle’s All-Greater Houston Team and was named the 1986 Defensive Player of the Year in the Greater Houston area by the Touchdown Club of Houston. Dotson lettered at Baylor from 1988-1991 and tallied 193 career tackles with 18 sacks. He was a three-time All-SWC selection and was a consensus All-America as a senior. Dotson played pro football with the Tampa Bay Buccaneers from 1992-1995 and Green Bay Packers from 1996-2001. He was a member of Green Bay’s Super Bowl XXXI championship team. The Santana Dotson Foundation in 1995 with the goal of helping at risk youth attend college. Dotson’s father Alphonse also played defensive tackle from 1965-1970 with Kansas City, Miami and Oakland in the AFL.