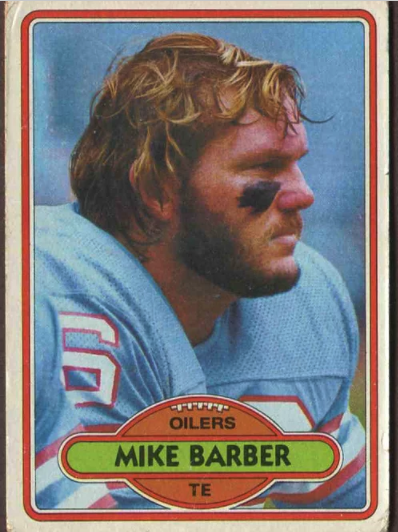 Barber was an all-state quarterback and linebacker for the White Oak Roughnecks in 1971. In his junior season, the Roughnecks outscored their opponents, 554-118, and won 13 consecutive games before losing to Pflugerville, 7-6, in the semifinals. A year later, White Oak won 12 in a row but lost to Barbers Hill, 14-3, in the quarterfinals. Barber was selected to the prep all-America team at linebacker and played in the THSCA All-Star Game in 1972. His career totals include 31 touchdowns, 26 touchdown passes, 2,329 passing yards and 1,489 rushing yards. Barber also led White Oak to a state title in track by winning the 120-yard high hurdles and the 440-yard relay. After attending college at Louisiana Tech, Barber played tight end and wide receiver for the Houston Oilers (1976-81), Los Angeles Rams (1982-85) and Denver Broncos (1985). Following his retirement from the NFL, he founded Mike Barber Prison Ministries and returned to football a decade later as a coach, first at Trinity Christian School in Cedar Hill and later at Grace Preparatory Academy in Arlington.