Elkins is generally recognized as Baylor’s greatest pass receiver, nosing out Stanley Williams and Sam Boyd for that honor. Elkins earned all-state recognition while playing on some of Gordon Wood’s greatest teams at Brownwood high School. He also excelled in other sports. Coach Woods called Elkins “the greatest competitor I ever saw.” Darrell Royal said Elkins’ performance against his Longhorns in the memorable 1963 classic was the “greatest performance by a pass receiver I ever saw.” Elkins took a severe battering from Texas tacklers that day but always got up and never complained. “I didn’t want to get up,” Elkins told a writer, “but I did.” That season he caught 12 touchdown passes including three for touchdowns against A & M. Elkins is Baylor’s first two-time consensus All-America performer. Among the highest paid pros in history, Elkins signed with the Houston Oilers after graduation. A knee injury shortened what promised to be a great pro career. Brownwood High School and Baylor University will always acclaim Elkins as one of their most super athletes. 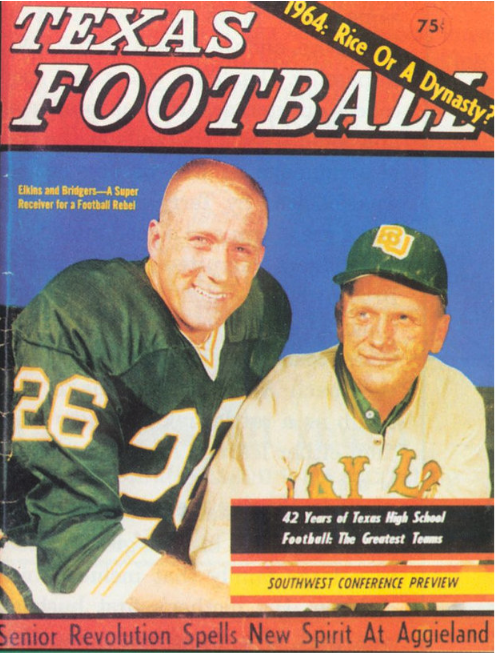