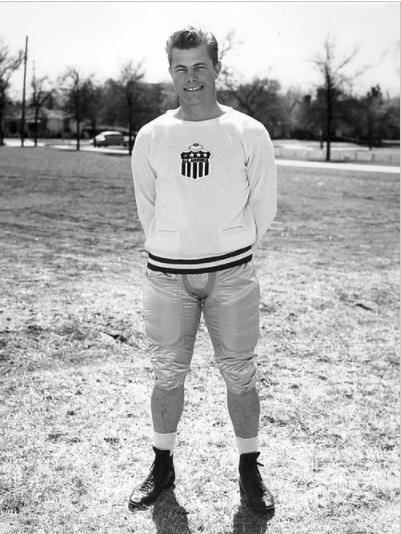 Kyle Rote was a star back at San Antonio Jefferson, leading the Mustangs to the brink of a state championship in 1946. Rote returned a kickoff 97 yards for a late touchdown to beat Lufkin in the semifinals, then ran for one score and passed for another in a 21-14 loss to Odessa in the championship game. He was the first Texas schoolboy to earn all-state honors in both football and basketball, and remains the only one inducted by both the Texas High School Football and Basketball Halls of Fame. After initially signing with Vanderbilt, Rote chose to attend SMU, starring from 1948-50 and earning all-America honors as a senior. He was elected to the College Football Hall of Fame in 1964. Taken No. 1 overall in the 1951 NFL draft, Rote spent 11 seasons with the New York Giants, earning four Pro Bowl berths and playing on the Giants' 1956 NFL title team. He ended his career with 300 receptions for 4,797 yards and 48 touchdowns, plus 871 rushing yards and four TDs. Following his retirement, he spent more than a decade as a sports broadcaster for NBC. Rote died on Aug. 15, 2002, at age 74.