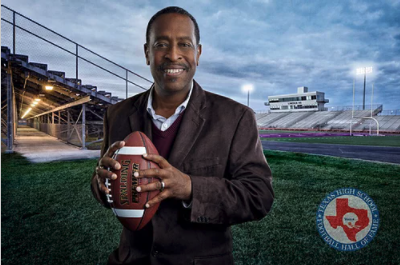 Ken Washington, son of longtime Lincoln coach Joe Washington and younger brother of Oklahoma All-American running back Joe Jr., made a name for himself by leading Lincoln to a 30-4-1 record in 1971-73 and the first 3 playoff appearances in school history. As a three-year starter at quarterback, Washington threw for 4,014 career yards, the third-highest total in history for Texas' top classification at the time.  And, he was named first-team all-state and a member of Texas Football magazine's 1973 Super Team as a senior.  Although he was considered a blue-chip prospect, he signed with the North Texas State University.  Washington was named Missouri Valley Conference's Newcomer of the Year in 1974 and he was also named AP Co-Back of the Week after totaling 213 yards in offense against SMU in his collegiate debut. He led the Mean Green to 10-1 in 1977 and finished his career with 4,313 total yards (3,040 passing, 1,273 rushing) and 33 touchdowns.  Ken Washington was inducted into the North Texas Hall of Fame in 1996.