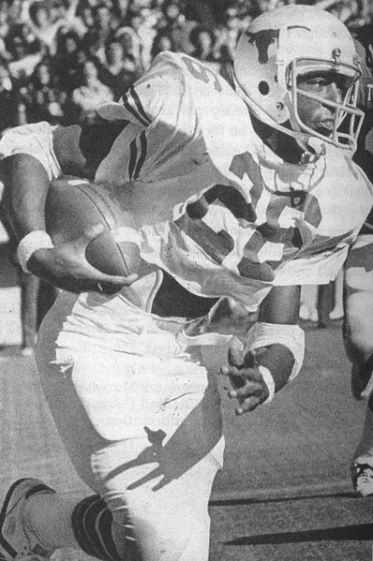 One of the fastest players ever to don a helmet in Texas, Jones was nearly impossible to catch as Lampasas' star tailback. He earned all-state honors for the Badgers after running for 45 TDs in 1974-75, and became a legend with his performance at the state track meet in 1976. After sprinting to wins in the 100- and 200-yard dashes, Jones broke off a 43.8-second anchor leg in the mile relay to pass six runners and win the race, clinching the team title for Lampasas almost single-handedly. Later that year he won a gold medal in the 400-meter relay at the Montreal Summer Olympics, then embarked on a dazzling four-year career at Texas, first as a running back before earning all-America honors as a wide receiver in 1978 and '79. Dubbed "Lam" (for Lampasas) by coach Darrell Royal to distinguish him from teammate Johnny "Ham" Jones of Hamlin, he went on to set UT track records at 100 yards (9.21), 100 meters (10.14) and 220 yards (20.14). Selected by the New York Jets with the second overall pick in the 1980 NFL draft, Jones signed a $2.1 million contract, the first million-dollar deal in NFL history. He caught 138 passes for 2,322 yards and 13 TDs in five injury-plagued seasons before retiring.