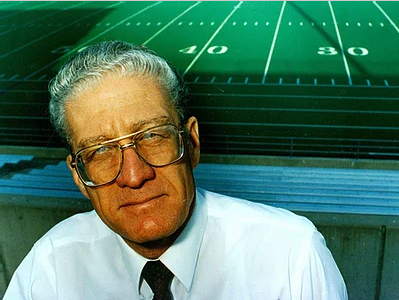 Clark was the architect of a football dynasty in Plano, winning two state championships in a 10-year coaching run, then presiding over a Wildcat program that won three more crowns during his 17 years as athletic director. The Jacksonville, Texas native posted a 107-17 mark and his teams were district champs nine times in 10 years from 1966-75. The Baylor graduate won his first title in 1967 when the Wildcats mauled San Antonio Randolph, 27-8, in the 2A final at Baylor Stadium in Waco, and his second in 1971, a 21-20 thriller over Gregory-Portland in the 3A championship game at Memorial Stadium in Austin. A year after Clark retired from coaching, Plano ISD opened 14,224-seat John Clark Field and the Wildcats marked the occasion by rolling to the Class 4A state championship in 1977. They tacked on two 5A titles, in 1986-87. during Clark's tenure as AD. Clark, who had stints at Weatherford, Amarillo and Jacksonville before arriving in Plano, is also a member of the THSCA Hall of Honor.