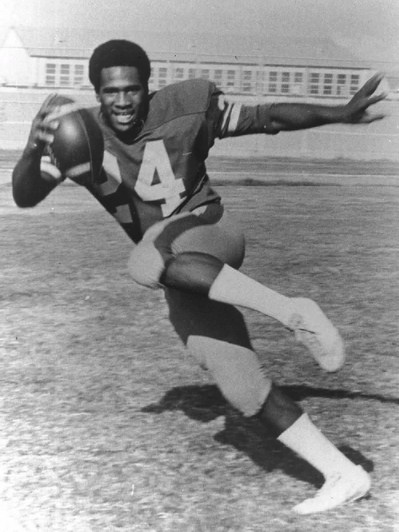 Washington is considered by many to be the most outstanding all-purpose back in the history of Port Arthur Lincoln. The wiry one used his tremendous athletic skills to do it all at Lincoln High and later at Oklahoma University. His Dad, the head coach used Joe Jr. as a split end his freshman year. He caught 20 passes and the attention of many. Moved to tailback the next season, Joe Jr., the 5’10”, 175 pound whiz, scored 13 touchdowns and kicked 12 extra points. He was even better as a junior. As a senior, he made All-America, All-State, All-District, and almost all the blue chip lists while posting a grade point average of 3.4. He rushed and raced for 1,406 and 1,708 yards, respectively, his last two years in high school. At Oklahoma, while making All-America, the Lincoln superstar had 3,995 rushing yards and 262 college career points.