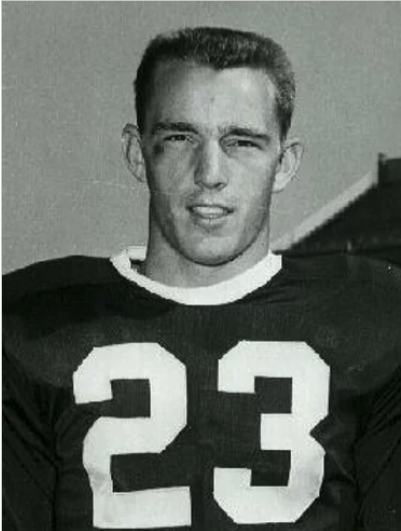 Swink was a two-sport star at Rusk, a powerful all-state running back who earned a spot in the Texas High School Coaches All-Star Games in both football and basketball after averaging 26.7 points on the court as a 6-foot-1 senior. TCU actually recruited him to play both sports, but it was soon apparent that he was born for football. He led the Horned Frogs to Southwest Conference titles in 1955 and '56, earning all-America honors and setting school and SWC records for rushing and scoring that would stand for three decades. As a junior he ran for 1,283 yards, including 235 on 15 carries in a 47-20 rout of rival Texas, and led the nation with 125 points. He finished second to Ohio State's Howard "Hopalong" Cassady in the Heisman Trophy voting, and won the national Swede Nelson Award for exemplary conduct and sportsmanship on and off the field. Swink passed up an NFL career to attend medical school, but played briefly for the AFL's Dallas Texans in 1960. He was awarded a Purple Heart and a Bronze Star, among other medals, while serving with the U.S. Army in Vietnam (1966-68), and was inducted into the College Football Hall of Fame in 1980. Two years later, the NCAA presented him with its Silver Anniversary Award for career achievements outside football.