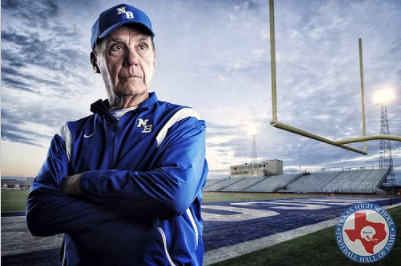 Jim Streety retired in 2014 as the fourth-winningest football coach in Texas history, posting a 343-130-3 record in 23 years at San Antonio Madison (194-85-1), and 17 years at New Braunfels (149-45-2). During his tenure at Madison, Streety became the winningest coach in San Antonio history. His Madison teams reached the 5A Division I state semifinals three times -- twice in his last three seasons. Streety was named Coach of the Year by the San Antonio Express-News in 2011 when Madison reached semis after opening the season 1-3 - the worst start of his career. His only losing season (4-6) came in 1974, his first year at New Braunfels. He would go on to lead the Unicorns to four semi-final playoff appearances. In 1988 he was selected to coach the Texas High School All-Star Game and was presented the Tom Landry Award in 2003. He is ranked behind only G.A. Moore, Phil Danaher and Gordon Wood on the All-Time win list for a Texas high school football coach. Known for his consistency and organization, Streety ranks first on the All-Time victory list among those who coached primarily at the 5A level. In 1999 he was inducted into the Texas High School Coaches Association Hall of Honor. Streety joins fellow Smiley, Texas native Buster Gilbreath (1996) in the Texas High School Football HOF and also becomes only the third coach from San Antonio to be honored by the Hall of Fame, joining D.W. Rutledge (2003) and Pat Shannon (2009). He is currently the athletic director at New Braunfels High School.