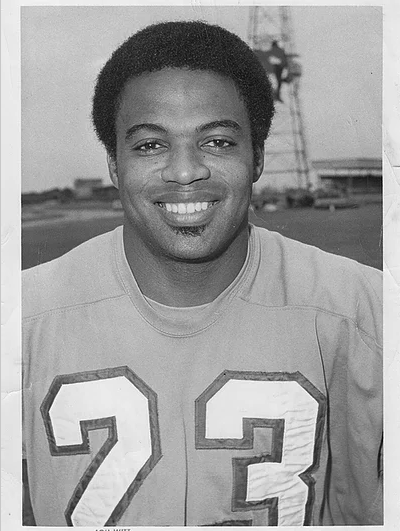 Jerry LeVias was the first African-American scholarship athlete in the Southwest Conference when he signed with SMU in 1965, and took the league by storm a year later in his first varsity season. The 150-pound receiver caught two touchdown passes in his first game, scored the game-winner in the final seconds against Rice in his SWC debut, and led the Mustangs to a No. 10 national ranking and their first conference title since the heyday of Doak Walker. LeVias earned first-team all-conference honors in all three seasons at SMU, and was a first-team all-American as a senior after setting school records for catches (80) and receiving yards (1,131). He also was named Academic All-America, and received the Fort Worth Kiwanis Club Award for Sportsmanship under circumstances that coach Hayden Fry described as "too horrible to discuss," including death threats, intimidation by fans, and all manner of on-field mistreatment by opponents. Ironically, LeVias was thrust into his pioneering role because Grambling, Alcorn State and other historically black football powers were not among the 100-plus schools who offered scholarships, deeming him too small to play. The coaches at Hebert High were unconvinced as well, but eventually gave the 117-pounder a tryout and were rewarded with a star quarterback. After college, LeVias earned MVP honors in the Senior Bowl and was drafted in the second round by the Houston Oilers. He spent six seasons in the NFL with the Oilers and San Diego Chargers, finishing with 7,500 all-purpose yards. He was inducted into the Texas Sports Hall of Fame in 1995 and the National College Football Hall of Fame in 2003.

In the Locker Room With Jerry LeVias - Texas Sports HOF