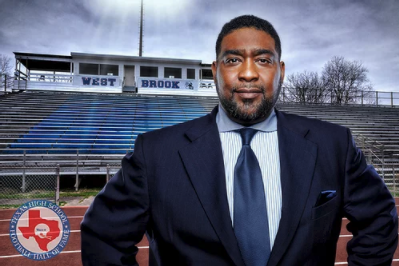 Jerry Ball was a two-way star in high school, playing fullback offensively while playing defensive end and linebacker on defense. While Ball played for Beaumont Hebert as a junior, he wasn't on any recruiters' radar until newly consolidated West Brook High School mauled heavily favored L.D. Bell 21-10 in the 1982 5A title game. The 6’0”, 235 lb. Ball was a First-team All-State selection on defense while making All-District at three positions. While at SMU (1983-1986) Ball was converted to nose tackle and the honors began to pile up. He was a four-year starter, three-time first-team All-SWC (1984-86), two-time finalist for both Lombardi and Outland Trophies. After college, Ball was drafted in the third round of the 1987 NFL Draft by the Detroit Lions. Ball would spend 13 seasons in the NFL with the Detroit Lions, Cleveland Browns, Oakland Raiders and Minnesota Vikings. He played in three Pro Bowls (1989, 1990 and 1991) and finished his career with 32.5 sacks.