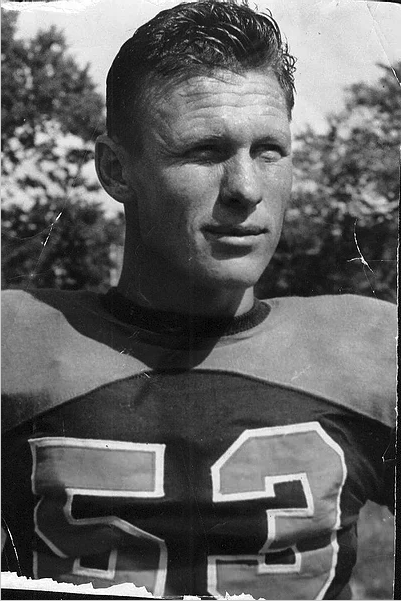 Lummus starred in football and track at Ennis from 1931-33, earning all-district honors as a sophomore and junior before leaving school as a senior after falling ill (and perhaps because his cotton-farming family couldn't afford his graduation expenses during the Depression). He earned his high school diploma on scholarship at Texas Military College, where he was all-conference in football, before becoming a two-sport standout at Baylor in football (1939-40) and baseball (1939-41). Signed by the NFL's New York Giants, Lummus played end for the Eastern Division champions as a rookie that season, but joined the Marine Corps in January 1942, shortly after the United States' entry into World War II. On March 8, 1945, Lummus was mortally wounded by a land mine explosion on Iwo Jima after leading a successful charge on three enemy positions. Carried to an aid station, he told the attending physician, “Well doc, the New York Giants lost a mighty good end today.” He was posthumously awarded the Medal of Honor on May 5, 1946, by President Harry S. Truman, and the U.S. Navy in 1986 named one of its ships the MV 1st Lt. Jack Lummus in his honor.