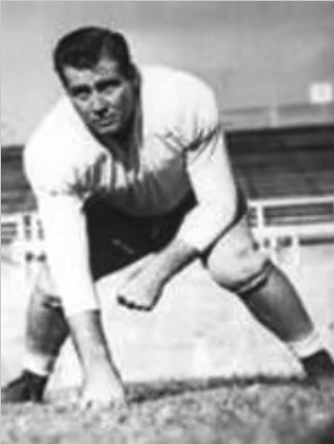 Hale is generally considered to be one of the more outstanding 2-way lineman in the history of high school and SWC football. Hale played at Dallas Woodrow Wilson and was All-State 3 straight years. He was chosen for the North Squad in the first All-Star High School game in Texas in 1935. A teammate of Heisman QB Davey O’Brien, both in high school and college, Hale was said to protect all 140 pounds of the little quarterback with his 245-pound frame on many occasions. Hale would get better at TCU. He was all-SWC twice and captained the Frog’s National Champions in 1938. Sat-Eve-Post writer Francis Wallace called Hale “the greatest college lineman in America” in his 1938 pre-season magazine feature. Hale joined the FBI in 1941; he worked there until 1951 when he became Chief of Security at General Dynamics. Hale held that post until his death in 1971.