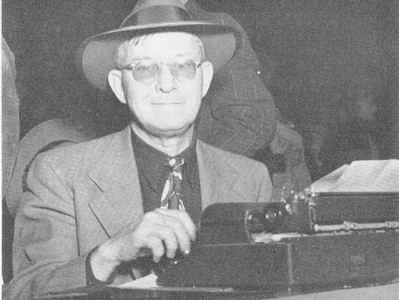 Tucker is probably the only person ever to play football for a high school and college team the same season. He was captain and quarterback for the Brenham High School, which played on Fridays. He took one course at Blinn College so he could play quarterback for Blinn on Mondays. Jinx was sports editor and linotype operator for two Waco newspapers for over three decades, starting in 1920. He was one of nine sportswriters that picked the official All-State Teams starting in 1929 for the Associated Press. Harold Ratliff said that Tucker was a rugged individualist, from whose lino type have come some of the classic storis of sport in the Southwest and who never has been known to pull his punches, come hell, high water, or threat of lible. Jinx pushed high school football during the Golden Era of the Paul Tyson regime. He was the first sportswriter to predict the outcome of high school games in Texas.