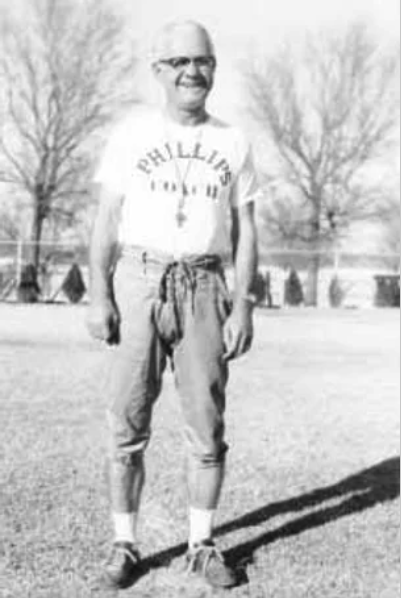 Walker is a legend among Texas High School football coaches and easily one of their greatest. The friendly man with the silver thatch and infectious smile coaches Phillips Blackhawks teams that won 173 games in 18 yards while losing only 24 and tieing six. Walker-coached Phillips teams won 15 district titles, nine regional crowns and the state Class A championship in 1954. Almost every time they played, Blackhawks were outweighed; usually outmatched in depth, seldom outscored and NEVER outcoached! Walker earned letters in four sports at Memphis High, made starting halfback as a 150-pounder at Hardin Simmons and coached Memphis teams that won 34, lost 12 and tied one in 4 seasons. He later scouted for the Dallas Cowboys and New Orleans Saints. The stadium in Phillips (near Borger) was named for Walker in 1968.