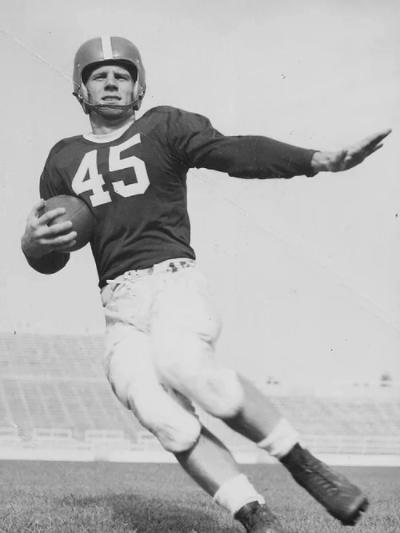 Immortalized as the “Granger Ghost” after a dynamic performance in a fog-filled game against Rockdale, Bartosh is a true Texas football legend. He led his Granger teams to undefeated records in his sophomore, junior and senior seasons. In the 1948 regional finals against Belton, Bartosh ripped off scoring runs of 70 and 99 yards in a 20-13 Lions’ win. He went on to star at TCU under Dutch Meyer, earning All-Southwest Conference recognition in 1950 while leading the league in total offense (1,733 yards). In 1951 Bartosh helped lift the Frogs to a SWC title and a trip to the Cotton Bowl. After serving in the Navy, Bartosh played a season of pro football for the CFL's British Columbia Lions, leading the team in scoring. Then Bartosh moved on to the coaching ranks, posting a 99-19-4 record in 11 years as head coach at four different Class 5A high schools. His 1972 state championship team at Odessa Permian is regarded as one of the best schoolboy teams in Texas history.