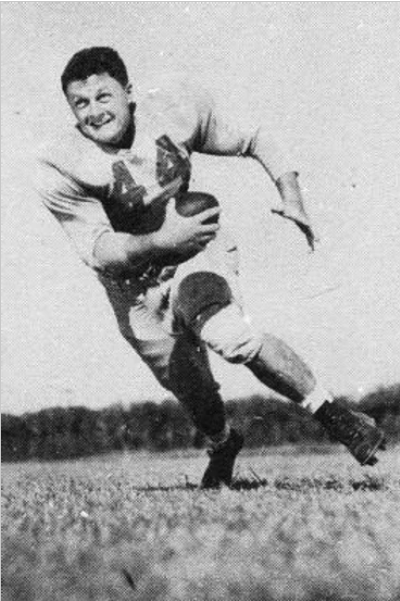 George Walmsley started his spectacular high school career as a 14 year old, 140 lb. freshman. His first three carrries as a substitute in a Goose Creek blowout resulted in touchdowns. Walmsley would go on to earn All-State and All-Southern honors in high school. In 1943 against Conroe, Walmsley scored 3 touchdowns on 4 carries in 90 seconds. His feat gained national acclaim when he was featured in a cartoon that was circulated nationwide by the United Feature Syndicate. Walmsley led the Ganders to three district titles and in 1943 they advanced to the state semi-finals. Goose Creek played Lufkin to a 7-7 tie but lost on penetrations. Walmsley proved his talent at Rice Institute by winning All-SWC honors as a sophomore. He was also the conference 100-yard dash champion with a time of 9.8 seconds in 1945.