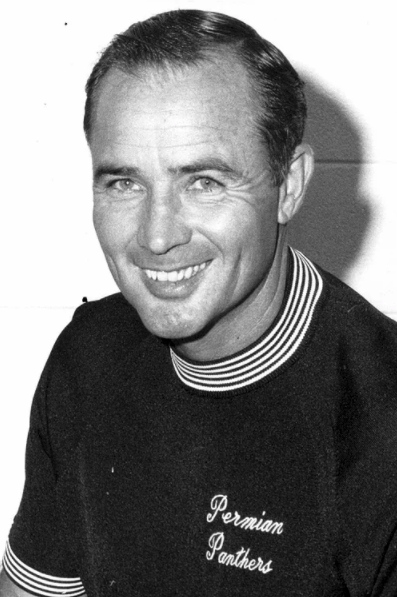 Gene Mayfield was a master at turning losing programs into state title contenders. A graduate of Quitaque High, he played quarterback for Coach Frank Kimbrough at West Texas State and then began his coaching career as a Kimbrough assistant. Mayfield got his first head coaching job at Littlefield in 1954, leading his team to the state semifinals in his first and third seasons. He began rebuilding at Borger in 1958 with a district title in his first season, and his 1962 squad was undefeated until a 30-26 loss to San Antonio Brackenridge in the state title game. Three years later, “The Father of Mojo” took over an Odessa Permian team picked to finish last in the district and won the state title with an 11-6 victory over San Antonio Lee. Mayfield’s teams also reached the state title game in 1968 and '70. He took the West Texas State job in 1971, then closed out his coaching career at Levelland (1982-88). His high school coaching record was 156-35-4. Mayfield was inducted into the Texas High School Coaches Association Hall of Honor, and is the only coach to win two THSCA All-Star Games (1963 and '67).