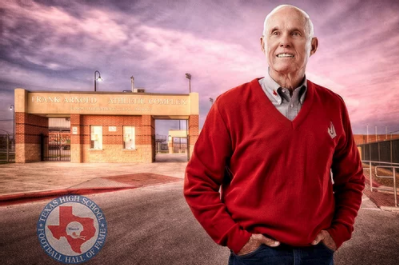 Served as athletic director at Converse Judson for 21 years, following a 20-year teaching and coaching career in the San Antonio area. Became the head football coach and athletic coordinator at Judson in 1980 and led the Rockets to the 5A state championship in 1983. Named the Texas Sportswriters Association Coach of the Year in 1983. Became Judson’s AD in 1984 and appointed assistant coach D.W. Rutledge as the Rockets’ head football coach. Rutledge won four state championships while guiding the Rockets. When Rutledge moved on to lead the THSCA in 2001, Arnold hired Jim Rackley, who took the Rockets to the state title in 2002. However, Arnold was known and respected by Judson coaches for leading the entire athletic department and helping all Rockets sports flourish. Arnold has been inducted into the THSCA Hall of Honor, the THSCA Athletic Directors Hall of Honor and the San Antonio Sports Foundation Hall of Fame among others. The Judson athletic facilities were renamed the “Frank Arnold Athletic Center” in 2006.