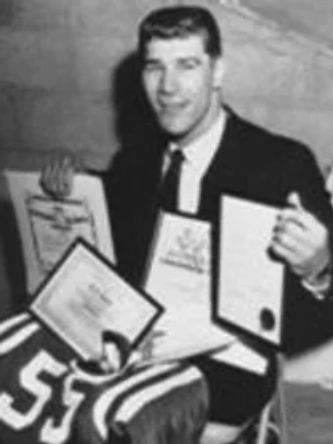 A knee operation kept Holub from playing his final season at Lubbock High, but he had earned all-district honors as a junior in 1955, bringing offers from Notre Dame and others after his senior year. He became the first athlete to sign a SWC letter of intent with Texas Tech after the Raiders entered the SWC. Holub earned all-America acclaim twice at Tech, including the 1960 season when his team won three, lost six, and tied one. Tech retired Holub’s famous number 55 after his senior season. Holub played in the East-West Shrine game, then signed with the Dallas Texans, who were to move their franchise to Kansas City as the Chiefs. The linebacker-center refused to let knee problems deter him, as he won Most Valuable Player honor with Kansas City, and was a key member of the team that beat Buffalo for the AFL crown in 1963. Holub also stood out when the Chiefs lost to Green bay in the first Super Bowl in 1967 and for the same team when they beat Minnesota in the Super Bowl of 1970. Holub is said to be the only player to start at two different positions in two Super Bowl games. He is in the Texas tech Hall of Fame, 101 Hall of Fame in Kansas City, Texas Sports Hall of Fame, National College Football Hall of Fame, and now in the THSF Hall of Fame.