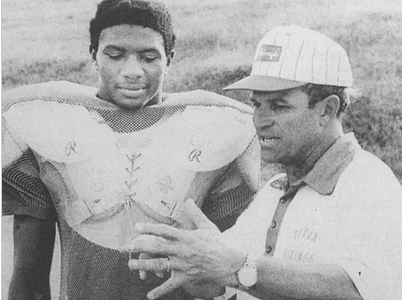 Dickey was voted High School Football Player of the Year in Texas in 1974, finishing ahead of such stalwarts as Billy Sims, Ted Constanzo, Greg Sellmer and Paul Rice. Dickey led the Vikings to a bidistrict championship in ’74 by scoring 25 touchdowns while rushing for 1,227 yards, a magnificent 7.8 yards per carry. He also averaged 18.1 yards on 22 punt returns, 21.9 on 18 kick returns and an eye-popping 25 yards on 25 receptions. Dickey was voted into Texas A&M’s Hall of Fame after rushing for a then-school record 3,658 yards -- second only to Earl Campbell in Southwest Conference history at the time -- and winning three straight NCAA track titles in the 60-yard dash. Drafted by the Baltimore Colts with the fifth overall pick in 1980, he rushed for 4,019 yards, caught 134 passes for 1,577 yards and scored 40 TDs in seven injury-plagued seasons with the Colts and Cleveland Browns. He was named “NFL Man of the Year” in 1984.