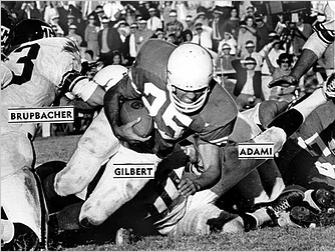 Gilbert has few peers, if any, when it comes to accomplishments by a Texas high school running back. Chris crumbled the opposition 31 times against two losses and 4 ties as a sensation with Spring Branch. Coached by Darrell Tully and led by Gilbert, the Bears gained the state playoffs in ’62, ’63, and ’64. Gilbert rushed for 3,303 yards, scored 272 points; his biggest season being as a senior when he carried 169 times for 1,311 yards. Gilbert, in1964, was team captain, All-District, All-State, Parade and Scholastic magazine All-American. At UT, success continued. Chris was All-SWC in ’66, ’67, and ’68, All-American in ’68. He was the first college player to rush for 1,000 + yards 3 straight seasons, and the only player in UT history to be chosen “Most Valuable” 3 straight years by his teammates. A Finance Major, Gilbert heads the Gilbert Investment Co. in Houston. He was co-founder and member of Board of Olympia; has served as Foreman of Harris County Grand Jury; Co-Chairman of a Congressman Bill Archer campaign, and is active in other civic activities. Chris and wife, Pam have two sons, Chris, Jr. and Ty.