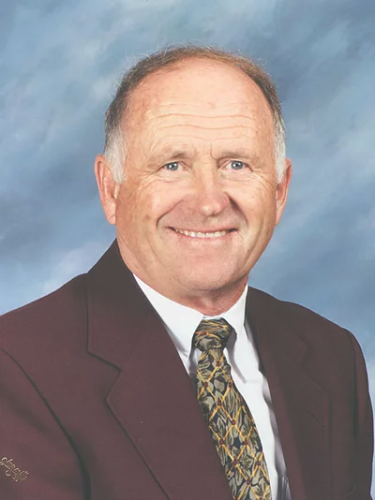 Johnston’s impressive career record of 315-93-8 ranks third on the state’s all-time list behind only G.A. Moore, Jr. and Gordon Wood. His 315 victories are the most ever for a coach at one school. In 1970, Johnston’s fourth season at Childress, he led the school to its first district title since 1953. In 35 seasons Johnston’s teams won 20 district titles, 18 bi-district games, 10 regional, one area, five quarter-final and two semi-final games. During the 1970’s the Bobcats were the most winning high school football team in the state with an amazing 113-17-3 record. That decade Childress earned nine playoff appearances by winning nine district titles. His 1975 and 1976 teams advanced to the 2A state championship game. Johnston started his football career as a quarterback at Paducah. He served as the President of the Texas High School Coaches Association in 1986-87 and was inducted into the THSCA Hall of Honor in 1994. In 1991 Johnston was the first coach to be awarded the Tom Landry Award from the Texas High School Football Hall of Fame. In 2003 he was inducted into the Panhandle Sports Hall of Fame.