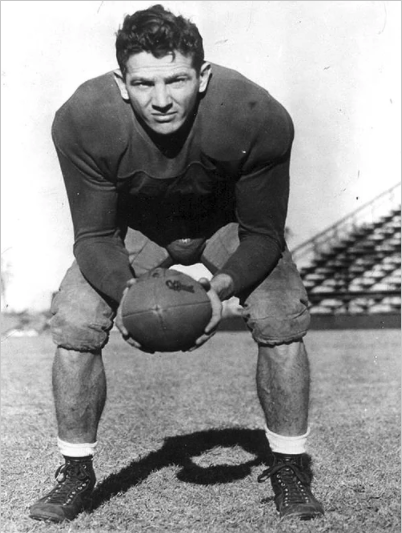 Bobby Wilson was an all-state tailback for the Corsicana Tigers in 1930 and 1931. A shifty, elusive runner, he weighed only 150 pounds. Wilson’s Tigers were undefeated his junior and senior seasons but lost both years in the state semi-finals. In 1930 the Tigers lost in a shootout to Amarillo 33-25 and the next season they were beaten by Beaumont 13-6. Wilson was also voted to the high school All-American team and the All-Southern team. At SMU Wilson scored one of the biggest touchdowns in conference history. He was the hero of SMU’s 1935 National Championship team. In what was the biggest game in SWC history he caught a 29 yard TD in the 4th quarter to defeat TCU and give SMU a trip to the Rose Bowl. Wilson played a year of professional football with the Brooklyn Dodgers in 19?. st Conference, and was an All-American his last year while sparking SMU to a national championship and into the Rose Bowl in 1935. Played pro ball one year,