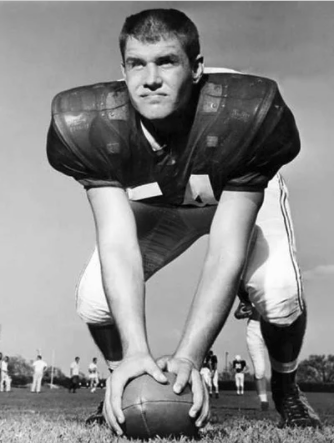 Harrison played alongside fellow Hall of Famer Charlie Davis at Stamford, earning all-district and all-state recognition at center in 1954. He was a part of coach Bud Wilkinson's back-to-back national champions at Oklahoma, and despite weighing only 225 pounds went on to earn all-conference, all-America and UPI College Lineman of the Year honors in 1958 after being stuck behind OU's legendary Jerry Tubbs. "Harrison is the best center I ever saw in college," Tubbs later said. "As a sophomore he was doing everything better than I could -- and asking me how to do things the right way." Harrison spent nine seasons as an NFL linebacker with the San Francisco 49ers, Philadelphia Eagles and Pittsburgh Steelers. He passed away February 4th, 2016 in Stamford, Texas at age 78.