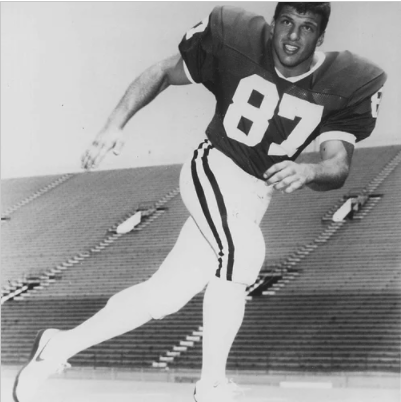 Smith was one of the greatest players and perhaps the most outstanding lineman in Plano history. An all-district tackle on the Wildcats' 1977 state championship team, Smith was even better the next season. He earned all-America honorable mention, all-state, All-Greater Dallas, and was named All-Metro Defensive Player of the Year.  He also played in the Texas High School Coaches All-Star Game. He earned Freshman All-America honors at Arkansas, as well as all-SWC second team as a sophomore, all-SWC first team as a junior and senior and was a two-time consensus all-America. Smith was a two-time finalist for the Lombardi Trophy and won the 1982 Knute Rockne Trophy given to the nation's outstanding defensive player. He was inducted into the College Football Hall of Fame in 2000. Taken by San Diego with the fifth overall pick in the 1983 NFL draft, Smith spent his entire 10-year career with the Chargers. He was named second-team all-AFC at linebacker in 1986 and '87, and second-team All-Pro in 1989. In 2009, Smith was named one of the 50 greatest Chargers of all time in voting by fans and the Chargers Hall of Fame.