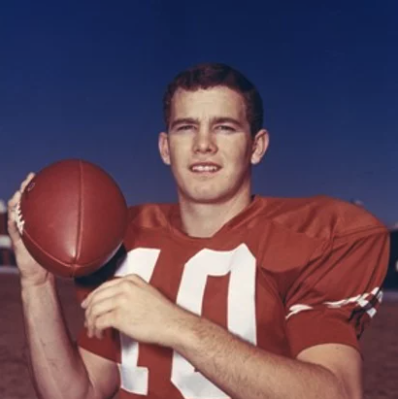 Bill Bradley was a four-sport star at Palestine whose talent as a passer, runner and punter earned him the nickname "Super Bill." Bradley led Palestine (13-1) to the 3A state championship as a senior in 1964, running for one touchdown, passing for two more and intercepting three passes in a 24-15 win over San Marcos in the title game. He finished his senior year with more than 1,700 yards of total offense, punted for a 39.6 average and intercepted six passes, and was among the most highly recruited players in the state before signing with Texas. Bradley quarterbacked the Longhorns for two years, but was converted to receiver with UT's switch to the wishbone and then to defensive back, where he became a star. He intercepted a school-record four passes against Texas A&M as a senior -- best ever by a Southwest Conference player -- and went on to become a three-time Pro Bowler and three-time All-Pro at free safety with the Philadelphia Eagles. He led the NFL in interceptions in 1971 (11) and 1972 (9), becoming the first player in history to lead the league in consecutive seasons. Since 1983, Bradley has coached for teams in the NFL, USFL, WLAF, CFL and the short-lived United Football League, as well as stints at Texas, Baylor and Lamar.