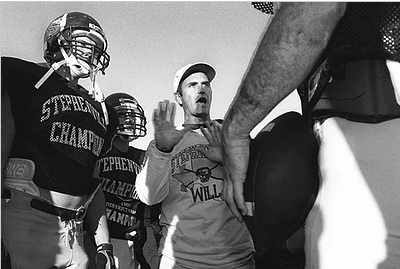 Briles was an all-state quarterback and defensive back at Rule who became a four-year letterman at wide receiver for Houston and Texas Tech. But clearly he was born to coach. At 28 he got his first head coaching job at Class 2A Hamlin, where he went 27-1-1 and took Pied Pipers to a state semifinal berth in 1985. Three years later, he took over a Stephenville program that hadn't reached the playoffs since 1952 and over the next decade created a dynasty that shattered offensive records, made the playoffs every year and won back-to-back state championships -- twice. Briles won 4A titles in 1993-94 using a ground game that produced 89 and 96 rushing touchdowns, the third- and second-highest totals ever at the time, behind only Big Sandy's national record 114 in 1975. Briles later converted to the spread offense and used it to win two more crowns in 1998-99, shattering a 73-year-old national record with 8,664 yards of total offense in '98. Briles is also known for developing quarterbacks, having sent six from Stephenville to Division I schools, including Branndon Stewart, Kevin Kolb and his son, Kendal Briles. Briles compiled a 135-29-2 mark at Stephenville and is 165-29-4 overall at the high school level. After reviving Houston's fortunes by leading the Cougars to four bowl games in five seasons (2003-07), Briles took over the Baylor program in November 2007. In short order, he engineered the Bears' first bowl season in 15 years, won more Big 12 games in 2010-12 than BU did in its previous 14 seasons combined, and recruited and coached the school's first Heisman Trophy winner (Robert Griffin III, 2011).