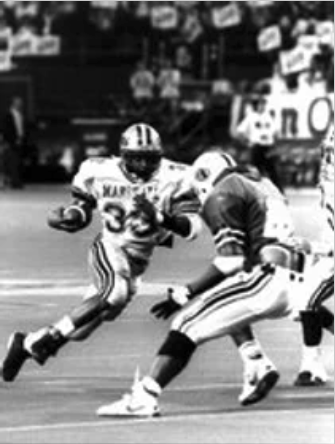 Holmes began his illustrious career as an all-state running back at San Antonio Marshall, where he scored 26 touchdowns and rushed for 2,031 yards as a senior. Holmes also led his school to its first appearance in a state championship game, a 27-14 loss to Odessa Permian in 1991. The three-time all-district selection and SAN ANTONIO LIGHT Player of the Year rushed for 4,080 yards during his high school career. At the University of Texas (1992-1996) Holmes split time at running back but proved he could play by earning MVP honors in the 1994 Sun Bowl with 161 yards rushing and four touchdowns in a 35-31 victory over North Carolina. Although his junior season was lost to an ACL tear, he rebounded in the first Big 12 championship game (1999) with 120 yards and three touchdowns in Texas’ upset win over Nebraska. During a brilliant 10-year NFL career (Baltimore Ravens 1997-2000, Kansas City Chiefs 2001-2006), the three-time Pro Bowler rushed for 8,035 yards and scored 86 touchdowns. In 2001 he became the second player in Chiefs history to lead the league in rushing (1,555 yards). The next season he was named the NFL’s Offensive Player of the Year by the AP. In 2003 he topped the 1,000 rushing mark for the third consecutive season and set the NFL record for touchdowns in a season with 27. In 2005 his career was cut short by an injury.