Ozarka Fueled by Nature Team of the Week 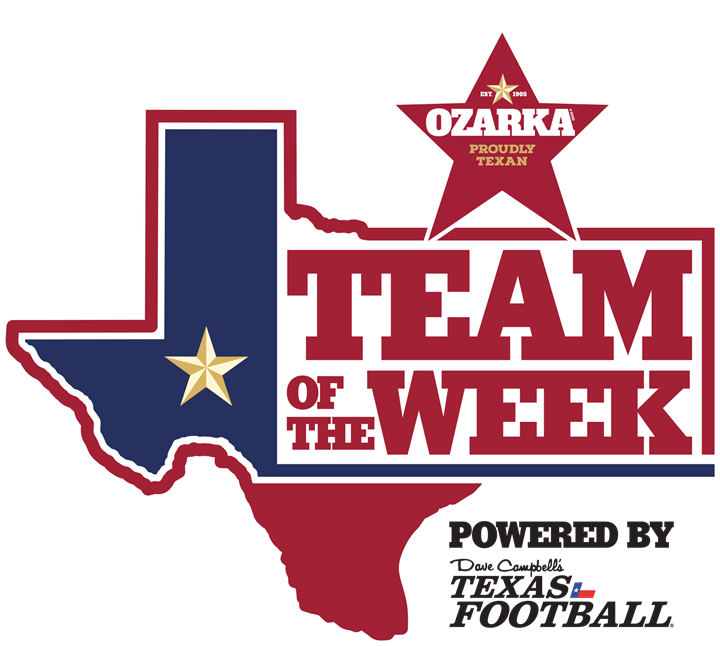 Dave Campbell’s Texas Football is proud to honor one team from each classification with the Ozarka Fueled by Nature Team of the Week award. The teams selected throughout the course of this program have exemplified the best of Texas high school football. 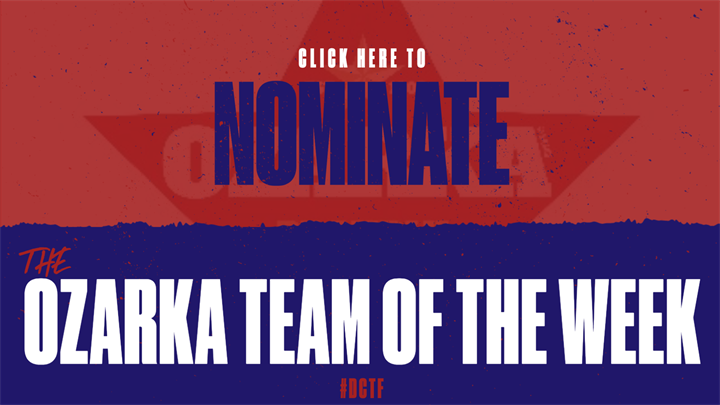 In the biggest game in the Rio Grande Valley to date this season, the Raiders’ hard-nosed running game and sturdy defense led them to an impressive 28-21 win over previously unbeaten Edinburg North.

Led by a ferocious defense, the Eagles are off to a 4-0 start for the first time since 1995 after a 48-0 victory over Houston Kashmere to open District 11-4A DI play.

In the game of the week in Central Texas, the Yoemen’s offense hit on all cylinders and the defense made enough plays to take down defending state champion and district rival Lorena, 48-44.

Facing an unbeaten team a division larger than them in Panhandle, the Skyrockets were not intimidated, taking the fight to the Panthers to bring home an impressive 26-13 victory.

The Bearkats sprang one of the upsets of the weekend, traveling to Westbrook and taking down the previously unbeaten No. 1-ranked defending state champion Wildcats in a thrilling 46-42 win.

The Chargers sprang the big upset on Friday night, traveling to Oakwood and beating state-ranked UIL squad Oakwood 72-58 to move to 4-0 on the season. 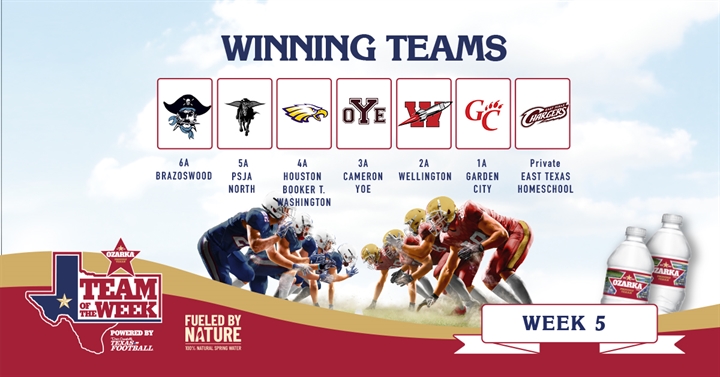 The long wait is over for the Generals, as Hani Ali ran for 158 yards and Depierreon Tate scored three touchdowns to power past Houston Austin 31-7, snapping a 35-game losing streak.

The Wolves used three turnovers and a steady dose of running back Jordi Hernandez to topple Amarillo Palo Duro 28-26, earning the first win in program history.

In a showdown of North Texas small school powers, the Gunter defense flexed its muscles as the Tigers went on the road and took down Division I power Brock, 21-16.

The Bulldogs are off to a 4-0 start for the first time since 2014 after surging past previously unbeaten Banquete, 26-14.

The Yellowjackets upset Calvert 58-22 on Friday night, getting their first-ever victory over the Trojans in their fifth meeting.

The Warriors’ offense took flight on Friday night as quarterback Jacob Vaughan paced a 480-yard attack in a 50-13 win over Grapevine Faith Christian. 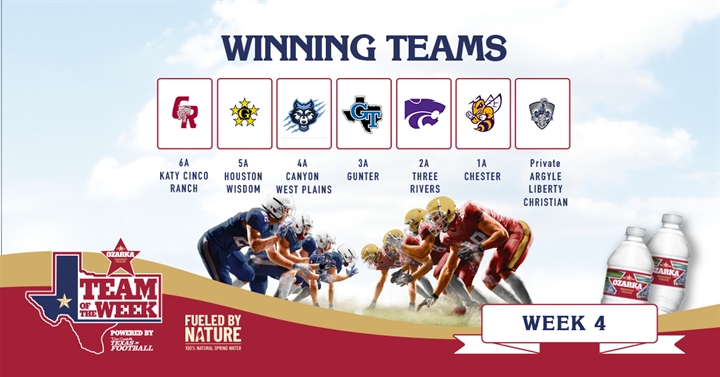 6A: Round Rock Westwood

The Chargers made history on Friday night, jumping out to a 40-15 halftime lead before closing out a 46-22 victory over Rice, improving to 3-0 for the first time in the program’s 15-year existence.

The Mavericks romped past San Antonio Memorial 50-0 on Thursday night, improving to 3-0 on the season — a remarkable feat considering the Mavs had won just four games in the past three seasons, including a winless 2021.

Days after the tragic death of junior varsity player Yahir Cancino, the Golden Wolves earned their first win of the season with an inspired 43-35 upset win over Spearman.

Punching well above their weight class against a state-ranked 3A Division I Edna team, the Bobcats were not intimidated, taking the fight to the Cowboys to earn a 40-22 win and nab coach Jason Herring’s 200th victory at the helm of the program.

In one of the biggest upsets of the week, the Antelopes went to Turkey and stunned state-ranked Valley 64-50, improving to 2-1 on the season.

Playing without three starters due to injury, the Bulldogs stunned defending state champion Wylie Prep 46-40 to earn its first win of the year. 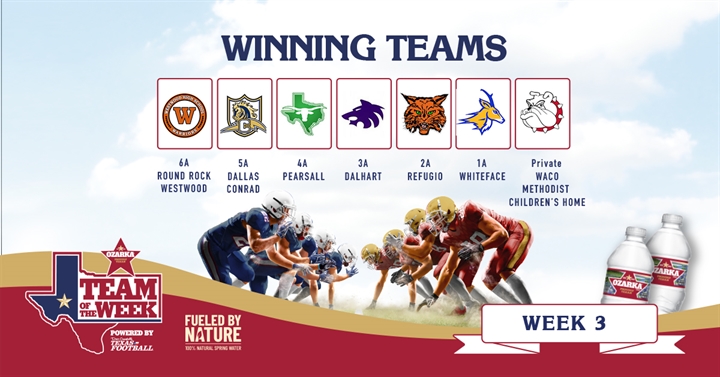 The Raiders broke into the win column for the first time since November 2017, snapping the state’s longest active losing skid at 42 games with a 27-14 victory over Aldine.

Playing without their head coach Ray Aguilar who was tending to a family matter, the Tigers rode Lueranze Johnson and Gerry Chairez — who combined for 386 yards and 5 touchdowns rushing — to a 39-33 victory over El Paso Hanks, improving to 2-0 for the first time since 2016.

Deontray Scott ran in for an 11-yard touchdown in overtime – his third touchdown of the game – as the Rattlers surged past rival Madisonville, 27-21.

A week after snapping a 22-game losing streak, the Bulldogs jumped all over Tom Bean early and never looked back, getting a 49-6 victory to notch consecutive wins for the first time since September 2018.

In a Top 5 showdown in 2A Division I, the Pirates defense stood tall and two-way star Breck Chambers paced the offense as Crawford downed No. 4 Centerville, 21-6.

A program that’s battled through long losing streaks and low participation numbers earned its reward on Friday, taking down Melissa CHANT 54-26 to earn its first varsity win since 2018.

The Warriors made a statement on Saturday night, beating defending state champion Houston Emery-Weiner by mercy rule 54-6 to improve to 2-0 on the season.

Darnell Green and Jayvion Wolfe combined for 249 yards on the ground as the Spartans surged past Cy Ridge 32-16, snapping their 20-game losing skid.

In their first UIL contest, the Broncos looked more than ready for the challenge, cruising past state-ranked Leander Rouse, 47-21.

Just months after an unspeakable act of gun violence changed the town forever, the Coyotes played the most inspired game of the young season, knocking off Carrizo Springs, 21-13.

Quarterback Layne Honea threw for 291 yards and six touchdowns to pace the high-flying Eagles offense as TLC snapped a 24-game losing streak — the state’s fourth-longest active skid — with a 42-36 win over Ozona.

Chris Garcia ran for 127 yards and two touchdowns and the defense held up its end of the bargain as the Moguls took down Mercy Culture Prep 18-14, ending a 16-game losing streak.

In one of the biggest upsets of the weekend, the Bulldogs dominated state runner-up Motley County 54-6 at the Jayton Gridiron Classic.

In a high-profile matchup of state-ranked squads, the Panthers’ defense snuffed out Aledo’s attack en route to a 24-17 victory. 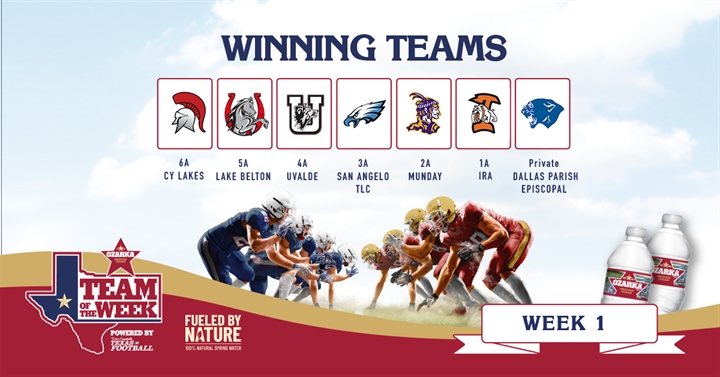 CLICK HERE for an archived look at the Ozarka Fueled by Nature Team of the Week!