Teams to watch, favorites and things to know to get you geared up for the 2022 Texas 7-on-7 State Tournament scheduled to kick off Thursday afternoon in College Station!

Thursday marks the beginning of the 24th annual Texas State 7-on-7 Championships, and for the 23rd year the event will be held in College Station, and once again the action will take place at Veterans Park. A robust 128 teams from across the state will gather for three days of action in one of the final big off-season events before the start of the 2022 Texas high school football season. The event has grown from humble beginnings with just 24 teams playing the inaugural event to this weekend’s massive showcase. As usual, we've decided to give you a tournament primer and some things to watch for the exciting weekend of action!

For those of you who are new to this, 7-on-7 is a game very similar to flag football. It's played on a 45-yard field, with seven players per side. There’s no rushing; it’s all passing and QBs have four seconds to throw the ball. Games are played in two 15-minute halves and the clock never stops.

Who Are The Historical Powers?

There’s no question Celina has the best history of teams at the State 7-on-7 Tournament. The Bobcats have won four titles (2000, 2007, 2009 and 2012) and nearly every year are a contender to bring the hardware home and they’ll be in the mix once again in the Division II bracket. Other multiple title winners include:

Arlington Lamar saw their long streak of qualification for State 7-on-7 end this summer as they were the only team in the state to have qualified for every State 7-on-7 Tournament since 1998, they made two semifinals in qualifying tournaments but failed to advance.  Brownwood how holds the longest streak of qualifying for the State Tournament at twenty-two straight years. 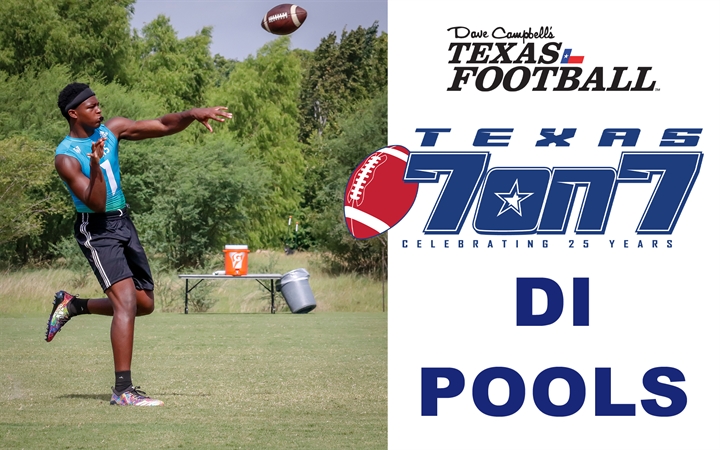 All three defending champions will return to College Station to defend their titles in 2022. East Bernard dominated Division III in 2021, going 8-0 in two days to win the crown and they wasted no time qualifying in the first Division III SQT of the summer at Wallis Brazos in early May. Kaufman waited until the final weekend to punch their ticket in the Division II bracket as they qualified on the final weekend in Division II at the Celina SQT June 11. Hebron also qualified early on as on May 14 the Hawks earned the chance to defend their crown, qualifying at the Colt Classic SQT in Arlington.

How Do The Champions Do In The Fall?

However, just because you don’t win a state title in football doesn’t mean the season was a failure, check out some of the other deep playoff runs by State 7-on-7 Champions below: 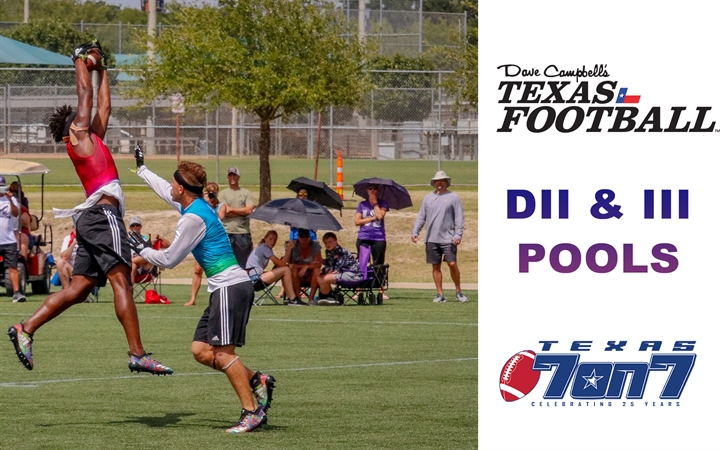 It’s Been a While, Welcome Back!

These teams have advanced to the State 7-on-7 Tournament before, but it has been a few years, so welcome these old friends back to College Station!

First Appearance At The Dance

Below is a list of the teams making their first-ever appearance at the State 7-on-7 Tournament.

District 26-6A out of the Austin area has an impressive five teams who qualified for the Division I State Tournament with Lake Travis, Austin Westlake, Austin Anderson, Dripping Springs and Buda Johnson all making the trip to College Station. 1-6A for the second straight year has four teams headed to the State Tournament with El Paso Eastwood, El Paso Eastlake and El Paso Coronado making return trips along with El Paso Franklin who qualified for the first time since 2018.

Road Tripping Or Sleeping In Your Own Bed?

In Division II the top travel award goes to Dumas who will venture 560 miles south from the Texas Panhandle down to College Station. There aren’t any truly local teams playing in the Division II bracket, with Rockdale getting the honors as the “local” squad with just a 55-mile one way trip.

In Division III, Stratford WAY up in the Texas Panhandle has the longest road trip as the Elks will travel 594 miles to College Station, while nearby Hearne doesn’t have to deal with hotel reservations as they are just 25 miles away.

Who Are This Year’s Favorites??

As always picking results in the State 7-on-7 tournament is a dicey proposition at best, but we make our best effort to name five teams to keep an eye on in each division.

Coming Out to Watch Your Team Play?

If you can, come on out to College Station and cheer your favorite team on. Even if you are just a high school football fan, it’s a blast to come out and watch these talented players in action up close and personal. Admission is free, bring a chair, a cooler stocked with cold drinks and lots of sun screen! The Bryan-College Station area has plenty of hotels, but they book quick so if you plan on staying more than a day, make sure you get your reservations ASAP. The Veterans Park complex in College Station is quite large and if you plan on going to multiple fields to check out the action, be prepared for a 10-15 minute walk. The DCTF crew will be out and about all over the place so come by our tent and say hello or if you see us out at a field say hi!

How To Follow The Tournament If You Can’t Make It

If you can’t make it out, DCTF will be all over the action tweeting out updates and video throughout the weekend! Check us out on Twitter @dctf or go to http://www.texasfootball.com for live score updates.  We’ll also have a live broadcast on all three days from the scene FREE OF CHARGE thanks to our friends at Texas Army National Guard!! Check out all the action at http://www.texanlive.com