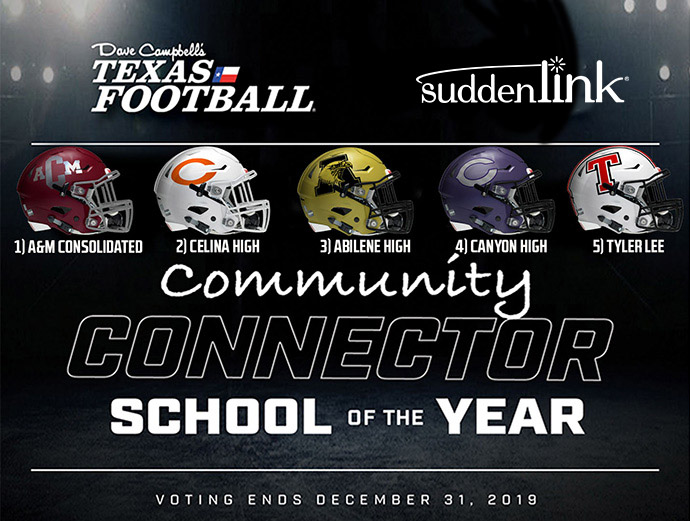 Suddenlink in partnership with Dave Campbell’s Texas Football believes in great connectivity and supporting each community it serves and that’s why they’re presenting the Dave Campbell’s Community Connector School Program presented by Suddenlink.

At the end of the season, communities will rally to vote for the Community Connection School of the Year Award powered by Suddenlink. Voting will start November 11th and end December 31st. Stay tuned for more information!

The Tigers remained unbeaten on Friday night surviving a game effort from Bryan Rudder in a 25-14 victory to improve to 9-0 on the season. QB Gage Pahl had a pair of first quarter touchdown runs to stake the Tigers to an early 14-0 lead, but the Rangers rallied to cut the lead to just five at 19-14 in the fourth quarter before Kerry Brooks’ 28-yard touchdown run sealed the Tigers ninth straight win. A&M Consolidated can clinch the outright district title next week with a win on the road at Cleveland.

The Abilene High Eagles lost to the Euless Trinity Trojans 42-21 ending their season with an overall record of 3-7 and a District 3-6A record of 2-4. The Eagles now head into their bye week and will not be going to playoffs.

“It was a hard-fought game,” Eagles head coach Michael Fullen said. “I’m proud of our guys and how they fought. I thought they were in it and the score doesn’t really indicate how we played so I’m really proud of our guys.”

“At halftime I just told them to go make plays and hit the reset button,” Fullen said.

The Eagles came back in the third quarter outscoring the Trojans 14-7 on a 28-yard Ramirez swing pass TD to wide receiver Tre Phillips and an 85-yard Colton Wilson kickoff return TD. However wide receiver Jeshari Houston fumbled the ball early in the fourth quarter which led to a Trojans TD and took away the momentum the Eagles gained after a recovered onside kick. The Eagles failed to score again until another Ramirez-to-Phillips TD with about three minutes remaining in the fourth quarter.

“It’s been a great year despite our losses,” Eagles offensive lineman Khalil Spivey, senior, said. “We’re a way better team than our record shows and we came to work day in and day out and some things didn’t go our way in a couple of games but it’s been an honor leading this team. These guys are great and they left it all on the field. I had to come out of the game because I might have cracked ribs but they played their butts off for me and I’m so grateful for them.”

Spivey and safety Jorge Hernandez have been apart of the varsity team for three years now and are two of Fullen’s favorite players.

“They’re a big part of our team in terms of leadership and work ethic,” Fullen said. “They’ve played a lot of football for us and they’re really going to be missed. They’re two of my favorites.”

The Eagles allowed the Trojans to gain 334 rushing yards and allowed 934 total yards of offense to their opponents in the final two games against Weatherford and Trinity.

“Our game plan was to fit our gaps correctly and run our butts to the ball when it’s thrown or wherever it’s at just empty our tanks and give it our all,” Hernandez said. “I think we did pretty good, the offense started kind of slow but picked it up for sure. Everyone emptied their tank and played their heart out.”

The Eagles now head into a bye week for their last week of the season and currently place sixth in District 3-6A after the loss last night.

“It was not the way we wanted the season to end,” Fullen said. “It’s a tough district that we’re in and it’s always going to come down to the wire but overall I thought our team grew and we battled the injury bug a little bit. But it’s like I told the kids last night, the wins and the losses and the way your season ends up sometimes you’ll remember that but you’re going to remember the things you do every day, the locker room, the weight room, the practice field, the interactions with your coaches and teammates because that’s what you’re going to takeaway from this.”

Despite the loss, Fullen, Spivey, and Hernandez remain positive about their season.

“I want Eagles fans to know that I’m proud of our guys and we’ll get to work right away for next year,” Fullen said.

“I want Eagles fans to know that it’s a great day to be an Eagles,” Spivey said.

The Eagles went on the road and dropped a tough 28-22 decision to Hereford on Friday night for their third straight loss after a 6-0 start. Canyon is hoping to get healthy in time for the playoffs and if Coach Bryant’s squad can get back to full strength they’ll be a tough out in the postseason.

Coming off of a bye week, Celina travels to Argyle to play the Eagles for the district championship this Friday at 7:00 p.m. The two teams became rivals when they joined the same division in 2012. Celina is 1-7 against Argyle, their only win coming in 2015.

In and effort to prepare the players for the atmosphere, Elliott went over how the environment feels and stressed the basics over the bye week.

“When you play a big game those are two of the big key factors; taking care of the football and that you have [good] field position,” Elliott said. “Those are things we gotta go into the game concentrating on being able to do.”

“[He] can get down the field, so he’s going to be someone that we’ve contain and keep from making those big passes,” Elliott said. “Their offense is very powerful, they’ve been scoring 60-70 points a game for several games.”

“He’s got a great arm, not a great runner, but he is a great quarterback as far as throwing [goes],” Elliott said. “Our defensive goal is to stop the big pass routes [and] get pressure on the quarterback. He’s only been sacked one time this year, those are going to be big keys going into the game.”

Although the Eagles might “be better at certain positions,” assistant coach Terry Grayson believes the Bobcats are the better team.

“A district championship is on the line, we have to do our job and do it very well,” assistant coach Terry Grayson said. “We have to do what we do better than they do what they do. If all 11 are doing their job, it’s going to be very difficult to beat us.”

Coach Terry Grayson could have easily been put on the path to drugs.

Before he went through seven or eight different foster homes as a kid, Grayson was surrounded by a drug addicted family. After getting taken away from that situation, there were times when he didn’t know if there would be a roof over his head, clothes on his back or where his next meal was going to come from. He wasn’t even aware of the four or five siblings he had until he was finally put in a children’s home at the age of five.

“I want to capture the kids hearts before I teach them anything about the sports that I coach,” Grayson said. “If I don't get them to believe in themselves first, I’m not doing my job.”

Grayson was first introduced to football himself at age five at the children’s home.

“They got us involved in sports,” Grayson said. “I played flag football until I was in the 7th grade, then they got me into other sports. Throughout high school I did football, basketball, track and baseball but I mainly stuck to football and basketball.”

Though he’s lived in Celina for a few years, Grayson taught at Frisco Centennial and Dallas Jesuit before coming to coach and teach at the high school.

“I’ve actually tried to hire him for the past three or four years,” head coach Bill Elliott said. “I really wanted to try and get him because of the kind of man he is, the kind of character he has, [and] kind of faith he has. [He’s a] great leader. The inspiration he has for our kids, it's a great thing to have.”

Grayson gained that inspiration from his church, coaches and teachers.

“They didn't have to support me or love me the way that they supported their own kids, so now as a teacher I think that anybody and everybody around me is my kid,” Grayson said. “ [It’s] an amazing opportunity for me to be a positive role model and love on them the way that I was loved on as kid.”

Grayson’s mentors were the ones who introduced him to football and motivated him to share the Christian faith.

“That joy of the Lord that he’s put in my heart, I call it the Jesus juice,” Grayson said. “The Lord always asks us to get our cups filled up every day, and that’s what I want to do. I want to get my cup filled up and then spread that love [and] joy with everybody else too.”

Grayson continues to use his overwhelming amount of “Jesus juice” to stick to his motto in life:

“[Coaching] isn’t a job for me, this is a calling,” Grayson said. “To the world you may be just one person, but to one person you may be the world.”

The Bobcats are playoff bound after their impressive 49-20 victory over Anna, QB Hunter Watson threw for 150 yards and two touchdowns, while RB Logan Point gave Celina much needed balance with 133 yards on the ground and two touchdowns. Celina still has a chance for a share of the district title as they head into their bye week at 6-3 and 4-1 in district play. CHS will close the regular season in two weeks as they will visit number one ranked Argyle.

The Red Raiders took one on the chin last week going to Longview and falling to the defending state champions 49-7. The Red Raiders have lost their last three games in district play but still control their destiny as a win over Mesquite Horn at home next week will left them to the playoffs for the first time since 2014.