Friday night is about community and wouldn’t be made possible without the support of great parents. Dave Campbell’s Texas Football has partnered with Grimaldi’s to help tell the stories of a few superstar parents and thank them for playing their part in making Texas high school football so special.

If one picture’s worth 1,000 words, what’s a field house full of memories worth to the athletes at Haltom High School?

Thanks to football mom and booster club officer Debbie Villavicencio, there are plenty of memories of last season’s 13-1 run to the 6A, Division II, Region I finals.

“She is always at every game, freshman, JV and varsity, and she’s a great photographer,” said Buffalos coach Jason Tucker. “We have photos that she’s taken all over our field house, and it’s not just football. I see her at almost every game I go watch.”

For Villavicencio, the photography is more than a passion. She’s taken pictures through all of her children’s high school careers – son Hunter is her fifth child – but she takes the photos for everyone in what she calls her extended family to have and enjoy.

In addition to taking photos, she manages the football program’s social media accounts. That enables her to make sure that the people who make the memories get to see and keep them.

“I just enjoy it,” she said. “I like for the kids to have pictures. It’s important for them to have these memories. These are the best times of their lives.”

Making their high school – and football playing – years memorable is a goal Villavicencio shares with the rest of her booster club. They work together to help make the football program – and by extension the community – something to be proud of.

Tucker said the booster club’s fundraising has become much more effective, and that coincided with Villavicencio’s arrival on the board.

“When I first started here, the booster club worked hard to raise enough money for us to have a nice banquet,” Tucker said. “Since she’s come on board, we’ve raised enough money to buy alternate jerseys for the varsity, which the kids really love, and lots of new items for practice including a blocking sled for the offensive line and new pads for that sled.”

If the added wardrobe option helped the football team’s spirits, another booster club endeavor has helped increase community spirit. In conjunction with fundraising, Villavicencio’s taken the lead in developing more merchandise that raises money for the program while letting people show off their Haltom pride.

“We’ve become a much more involved community,” she said. “I can tell you that, as a parent, I can go anywhere close to Haltom – Keller, Fort Worth, North Richland Hills – and if we have a Haltom shirt on, people stop and want to talk to us now. They are excited. A lot of people will let us know that they went to Haltom too. They are proud of their school. They are proud of the community.”

And the community is proud of her.

“She’s always looking to do things that maximize the program for our kids,” Tucker said. “She’s been a big part of what we’ve accomplished over the last three years.” 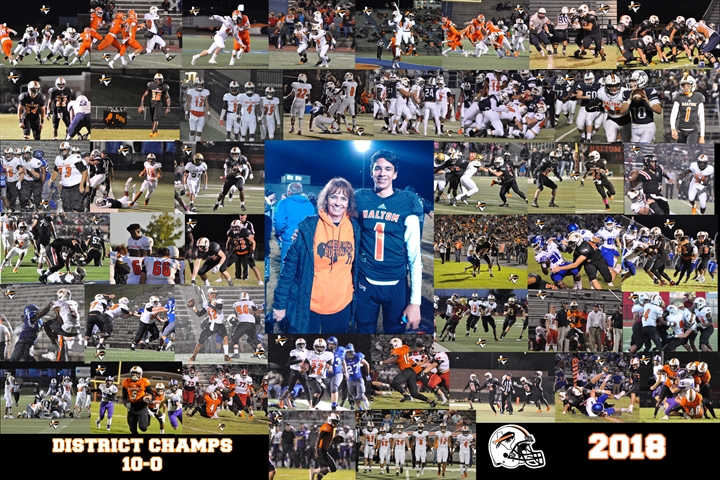