DALLAS – Dave Campbell’s Texas Football and Whataburger are proud to honor the best and brightest stars in Texas high school football with the announcement of the 300-player ballot for the 2022 Whataburger Super Team. Texas high school football fans nominated more than 3,000 players on TexasFootball.com, and now must narrow the field from 300 players to the 40 honorees.

Fans can now vote for which players they believe deserve a spot on the 2022 Whataburger Super Team by voting at TexasFootball.com/WhatASuperTeam.

“Whataburger and high school football have been proud Texas traditions for so many years,” said Rich Scheffler, Whataburger Executive Vice President and Chief Marketing Officer. “We’re excited to celebrate these talented players and proud to partner with Dave Campbell’s Texas Football. Thanks to the fans for voting and their support.” 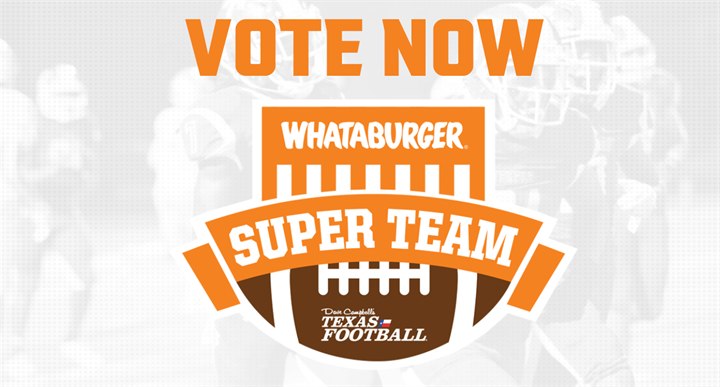 For more than 62 years, Dave Campbell’s Texas Football has been “the bible” to millions of football fans across the Lone Star State. The annual summer edition of the magazine remains a rite of passage for all Texans, previewing every football team in the state — from the rabid world of Texas high school football, through the college ranks, and into the Dallas Cowboys and the Houston Texans. Over the course of six decades, Dave Campbell’s Texas Football remains the undisputed leader in Texas high school football, Texas college football and more. TexasFootball.com is the online home of Dave Campbell’s Texas Football, covering high school football, college football and recruiting across the Lone Star State. From thought-provoking commentary to videos to podcasts to its daily live show, nobody covers football in Texas like TexasFootball.com.

Whataburger is the hometown hamburger place that hasn’t compromised. We serve bold flavors and original recipes made to order, just like you like it, and pride ourselves on extraordinary hospitality and meaningful connections in our communities. That’s what’s led fans to Whataburger since Harmon Dobson served our first customer in 1950. Headquartered in San Antonio, we’ve stayed close to our roots while building sales of more than $3 billion annually across our 14-state footprint and over 900 locations. Even with our exceptional menu, we know that people make the difference at Whataburger. That’s why we’re a 2022 Top Workplaces Culture Excellence award winner. Want to become part of our orange spirit? Apply to become a Family Member (what we call our employees) at whataburger.com/careers. Just hungry for a great meal? Download our app on ios or android to order ahead. Shop Whataburger branded merchandise and selected sauces including our famous Fancy and Spicy Ketchup at WhataStore.com and find Whataburger original-recipe products in grocery stores. See our press kit for a list of locations, fun facts, milestones and other company information.